The time's right for a new Who 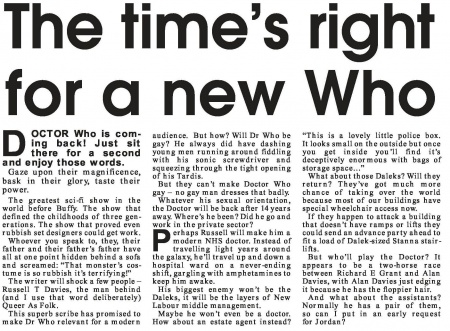 DOCTOR Who is coming back! Just sit there for a second and enjoy those words.

Gaze upon their magnificence, bask in their glory, taste their power.

The greatest sci-fi show in the world before Buffy. The show that defined the childhoods of three generations. The show that proved even rubbish set designers could get work. Whoever you speak to, they, their father and their father's father have all at one point hidden behind a sofa and screamed: "That monster's costume is so rubbish it's terrifying!" The writer will shock a few people —Russell T Davies, the man behind (and I use that word deliberately) Queer As Folk.

This superb scribe has promised to make Dr Who relevant for a modern audience. But how? Will Dr Who be gay? He always did have dashing young men running around fiddling with his sonic screwdriver and squeezing through the tight opening of his Tar dis.

But they can't make Doctor Who gay — no gay man dresses that badly. Whatever his sexual orientation, the Doctor will be back after 14 years away. Where's he been? Did he go and work in the private sector?

Perhaps Russell will make him a modern NHS doctor. Instead of travelling light years around the galaxy, he'll travel up and down a hospital ward on a never-ending shift, gargling with amphetamines to keep him awake.

His biggest enemy won't be the Daleks, it will be the layers of New Labour middle management.

Maybe he won't even be a doctor. How about an estate agent instead? "This is a lovely little police box. It looks small on the outside but once you get inside you'll find it's deceptively enormous with bags of storage space..."

What about those Daleks? Will they return? They've got much more chance of taking over the world because most of our buildings have special wheelchair access now.

If they happen to attack a building that doesn't have ramps or lifts they could send an advance party ahead to fit a load of Dalek-sized Stanna stair-lifts.

But who'll play the Doctor? It appears to be a two-horse race between Richard E Grant and Alan Davies, with Alan Davies just edging it because he has the floppier hair. And what about the assistants? Normally he has a pair of them, so can I put in an early request for Jordan?