The world of Dr Who mourns Jon Pertwee 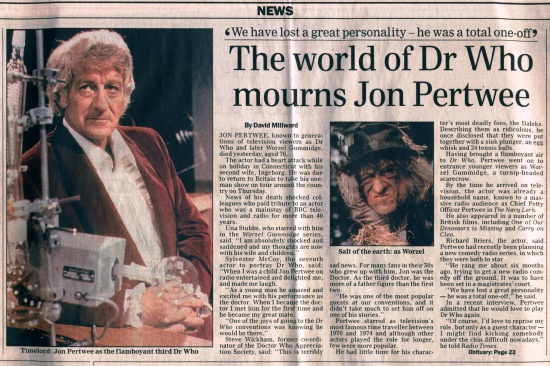 The actor had a heart attack while on holiday in Connecticut with his second wife, Ingeborg. He was due to return to Britain to take his one-man show on tour around the country on Thursday. News of his death shocked colleagues who paid tribute to an actor who was a mainstay of BBC television and radio for more than 40 years.

Una Stubbs, who starred with him in the Worzel Gummidge series, said: "I am absolutely shocked and saddened and my thoughts are now with his wife and children."

Sylvester McCoy, the seventh actor to portray Dr Who, said: "When I was a child Jon Pertwee on radio entertained and delighted me, and made me laugh.

"As a young man he amazed and excited me with his performance as the doctor. When I became the doctor I met him for the first time and he became my great mate.

"One of the joys of going to the Dr Who conventions was knowing he would be there."

Steve Wickham, former co-ordinator of the Doctor Who Appreciation Society, said: "This is terribly sad news. For many fans in their 30s who grew up with him, Jon was the Doctor. As the third doctor, he was more of a father figure than the first two.

"He was one of the most popular guests at our conventions, and it didn't take much to set him off on one of his stories."

He once disclosed that the Daleks were put together with a sink plunger, an egg whisk and 24 tennis balls

Pertwee starred as television's most famous time traveller between 1970 and 1974 and although other actors played the role for longer, few were more popular.

He had little time for his character's most deadly foes, the Daleks. Describing them as ridiculous, he once disclosed that they were put together with a sink plunger, an egg whisk and 24 tennis balls.

Having brought a flamboyant air to Dr Who, Pertwee went on to entrance younger viewers as Worzel Gummidge, a turnip-headed scarecrow.

By the time he arrived on television, the actor was already a household name, known to a massive radio audience as Chief Petty Officer Pertwee in The Navy Lark.

He also appeared in a number of British films, including One of Our Dinosaurs is Missing and Carry on Cleo.

Richard Briers, the actor, said Pertwee had recently been planning a new comedy radio series, in which they were both to star. "He rang me about six months ago, trying to get a new radio comedy off the ground. It was to have been set in a magistrates' court.

We have lost a great personality - he was a total one-off," he said.

In a recent interview, Pertwee admitted that he would love to play Dr Who again.

"Of course, I'd love to reprise my role, but only as a guest character - I might find kicking somebody under the chin difficult nowadays," he told Radio Times.

Caption: Timelord: Jon Pertwee as the flamboyant third Doctor Who

Caption: Salt of the earth: as Worzel