These are our demands--Who has the answers? 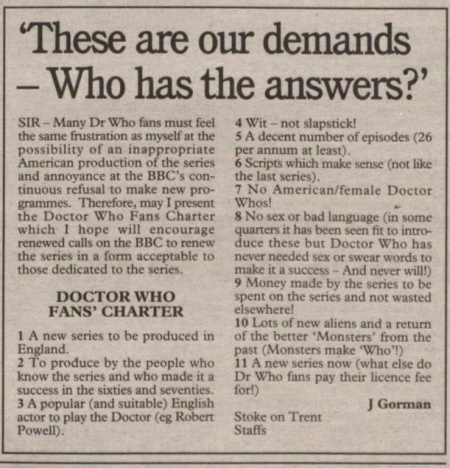 SIR -- Many Dr Who fans must feel the same frustration as myself at the possibility of an inappropriate American production of the series and annoyance at the BBC's continuous refusal to make new programmes. Therefore, may I present the Doctor Who Fans Charter which I hope will encourage renewed calls on the BBC to renew the series in a form acceptable to those dedicated to the series.

1 A new series to he produced in England.

2 To produce by the people who know the series and who made it a success in the sixties and seventies.

3 A popular (and suitable) English actor to play the Doctor (eg Robert Powell).

5 A decent number of episodes (26 per annum at least).

6 Scripts which make sense (not like the last series).

8 No sex or bad language (in some quarters it has been seen fit to introduce these but Doctor Who has never needed sex or swear words to make it a success - And never will!)

9 Money made by the series to be spent on the series and not wasted elsewhere!

10 Lots of new aliens and a return of the better 'Monsters' from the past (Monsters make `Who'!)

11 A new series now (what else do Dr Who fans pay their licence fee for!)