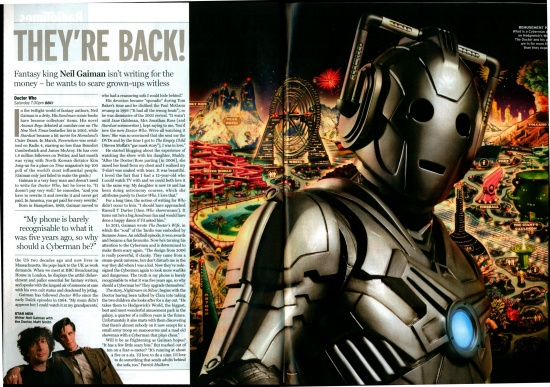 BEMUSEMENT PARK What is a Cyberman doing on Hedgewick's World? The Doctor and his party are in for more thrills than they expected

In the twilight world of fantasy authors, Neil Gaiman is a deity. His Sandman comic books have become collectors' items. His novel Anansi Boys debuted at number one on The New York Times bestseller list in 2005, while Stardust became a hit movie for Homeland's Claire Danes. In March, Neverwhere was serialised on Radio 4, starring no less than Benedict Cumberbatch and James McAvoy. He has over 1.8 million followers on Twitter, and last month was vying with North Korean dictator Kim Jong-un for a place on Time magazine's top 100 poll of the world's most influential people. (Gaiman only just failed to make the grade.)

Gaiman is a very busy man and doesn't need to write for Doctor Who, but he loves to. "It doesn't pay very well," he concedes, "and you have to rewrite it and rewrite it and never get paid. In America, you get paid for every rewrite."

Born in Hampshire, 1960, Gaiman moved to the US two decades ago and now lives in Massachusetts. He pops back to the UK as work demands. When we meet at BBC Broadcasting House in London, he displays the artful dishevelment and pallor essential for fantasy writers, and speaks with the languid air of someone at ease with his own cult status and deadened by jetlag. Gaiman has followed Doctor Who since the early Dalek episodes in 1964. "My mum didn't approve but I could watch it at my grandparents, who had a reassuring sofa I could hide behind."

His devotion became "sporadic" during Tom Baker's time and he disliked the Paul McGann revamp in 1996 ("It had all the wrong beats"), so he was dismissive of the 2005 revival. "It wasn't until Jane Goldman, Mrs Jonathan Ross [and Stardust screenwriter], kept saying to me, 'You'd love the new Doctor Who. We're all watching it here: She was so convinced that she sent me the DVDs and by the time I got to The Empty Child [Steven Moffat's "gas mask story"], I was in love."

He started blogging about the experience of watching the show with his daughter, Maddy. "After the Doctor/Rose parting [in 2006], she raised her head from my chest and I realised my T-shirt was soaked with tears. It was beautiful. I loved the fact that I had a 12-year-old who I could watch TV with and we could both love it in the same way. My daughter is now 18 and has been doing astronomy courses, which she attributes purely to Doctor Who. I love that."

For a long time, the notion of writing for Who didn't occur to him. "I should have approached Russell T Davies [then Who showrunner]. It turns out he's a big Sandman fan and would have done a happy dance if I'd asked him."

In 2011, Gaiman wrote The Doctor's Wife, in which the "soul" of the Tardis was embodied by Suranne Jones. An oddball episode, it won awards and became a fan favourite. Now he's turning his attention to the Cybermen and is determined to make them scary again. "The design from 2006 is really powerful, if clanky. They came from a steam-punk universe, but don't disturb me in the way they did when I was a kid. Now they've redesigned the Cybermen again to look more warlike and dangerous. The truth is my phone is barely recognisable to what it was five years ago, so why should a Cyberman be? They upgrade themselves."

The story, Nightmare in Silver, begins with the Doctor having been talked by Clara into taking the two children she looks after for a day out. "He takes them to Hedgewick's World, the biggest, best and most wonderful amusement park in the galaxy, a quarter of a million years in the future. Unfortunately it also starts with them discovering that there's almost nobody on it now except for a small army troop on manoeuvres and a mad old showman with a Cyberman that plays chess."

Will it be as frightening as Gaiman hopes? "It has a few little scary bits." But marked out of