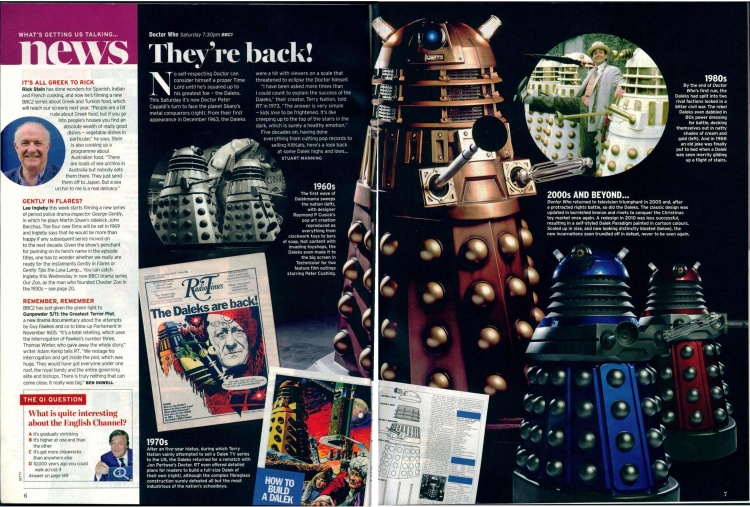 WHAT'S GETTING US TALKING...

No self-respecting Doctor can consider himself a proper Time Lord until he's squared up to his greatest foe — the Daleks. This Saturday it's new Doctor Peter Capaldi's turn to face the planet Skaro's metal conquerors (right). From their first appearance in December 1963, the Daleks were a hit with viewers on a scale that threatened to eclipse the Doctor himself.

"I have been asked more times than I could count to explain the success of the Daleks," their creator, Terry Nation, told RT in 1973. "The answer is very simple — kids love to be frightened. It's like creeping up to the top of the stairs in the dark, which is surely a healthy emotion."

Five decades on, having done everything from cutting pop records to selling KitKats, here's a look back at some Dalek highs and lows...

The first wave of Dalekmania sweeps the nation (left), with designer Raymond P Cusick's pop art creation reproduced as everything from clockwork toys to bars of soap. Not content with invading toyshops, the Daleks even made it to the big screen in Technicolor for two feature film outings starring Peter Cushing.

1970s After an five-year hiatus, during which Terry Nation vainly attempted to sell a Dalek TV series to the US, the Daleks returned for a rematch with Jon Pertwee's Doctor. RT even offered detailed plans for readers to build a full-size Dalek of their own (right), although the complex fibreglass construction surely defeated all but the most industrious of the nation's schoolboys.

By the end of Doctor Who's first run, the Daleks had split into two rival factions locked in a bitter civil war. The rebel Daleks even dabbled in 80s power dressing for battle, decking themselves out in natty shades of cream and gold (left). And in 1988 an old joke was finally put to bed when a Dalek was seen merrily gliding up a flight of stairs.

Doctor Who returned to television triumphant in 2005 and, after a protracted rights battle, so did the Daleks. The classic design was updated in burnished bronze and rivets to conquer the Christmas toy market once again. A redesign in 2010 was less successful, resulting in a self-styled Dalek Paradigm painted in cartoon colours. Scaled up in size, and now looking distinctly bloated (below), the new incarnations soon trundled off in defeat, never to be seen again.