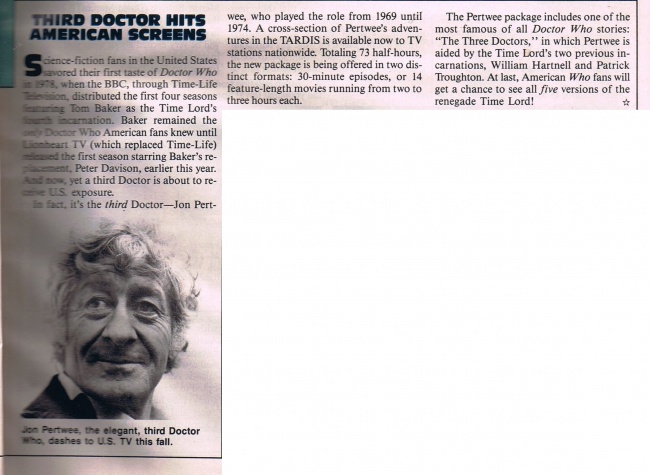 Science-fiction fans in the United States savored their first taste of Doctor Who in 1978, when the BBC, through Time-Life Television, distributed the first four seasons featuring Tom Baker as the Time Lord's forth incarnation. Baker remained the only American fans knew until Lionheart TV (which replaced Time-Life) the first season starring Baker's replacement, Peter Davison, earlier this year. And now, yet a third Doctor is about to receive U.S. exposure.

In fact, it's the third Doctor--Jon Pertwee, who played the role from 1969 until 1974. A cross-section of Pertwee's adventures in the TARDIS is available now to TV stations nationwide. Totaling 73 half-hours, the new package is being offered in two distinct formats: 30-minute episodes, or 14 feature-length movies running from two to three hours each.

The Pertwee package includes one of the most famous of all Doctor Who stories: "The Three Doctors," in which Pertwee is aided by the Time Lord's two previous incarnations, William Hartnell and Patrick Troughton. At last, American Who fans will get a chance to see all five versions of the renegade Time Lord!