This Doctor isn't the real McCoy 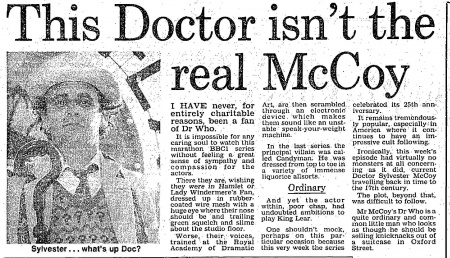 I HAVE never for entirely charitable reasons, been a fan of Dr Who.

It is impossible for any caring soul to watch this marathon BBC1 series without feeling a great sense of sympathy and compassion for the actors.

There they are, wishing they were in Hamlet or Lady Windermere's Fan, dressed up in rubber-coated wire mesh with a huge eye where their nose should be and trailing green squelch and slime, about the studio floor.

Worse, their voices, trained at the Royal Academy of Dramatic Art, are then scrambled, through an electronic device which makes them sound like an unstable speak-your-weight machine.

In the last series, the principal villain was called Candyman. He was dressed from top to toe in a variety of immense liquorice allsorts.

And yet the actor within, poor chap, had undoubted ambitions to play King Lear.

One shouldn't mock, perhaps on this particular occasion because this very week the series celebrated its 25th anniversary.

It remains tremendously popular, especially in America where it continues to have an impressive cult following.

Ironically, this week's episode had virtually no monsters at all concerning as it did, current Doctor Sylvester McCoy travelling back in time to the 17th century.

Mr McCoy's Dr Who is a quite ordinary and common little man who looks as though he should be selling knicknacks out of a suitcase in Oxford Street.