This Dr. Whose daughter has a timeless style 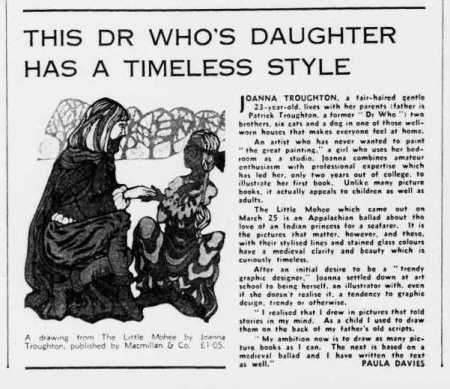 Joanna Troughton, a fair-haired gentle 23 year old, lives with her parents (father is Patrick Troughton, a former "Dr. Who") two brothers six cats and a dog in one of those well-worn houses that makes everyone feel at home.

An artist who has never wanted to paint "the great painting," a girl who uses her bedroom as a studio, Joanna combines amateur enthusiasm with professional expertise which has led her, only two years of college, to illustrate her first book. Unlike many picture books, it actually appeals to children as well as adults.

The Little Mohee which came out on March 25 is an Appalachian ballad about the love of an Indian princess for a seafarer. It is the pictures that matter, however, and these, with some their stylised lines and stained glass colors have a medical clarity and beauty which is curiously timeless.

After an initial desire to be a "trendy graphic designer," Joanna settled down at art school to be herself, an illustrator with, even if she doesn't realize it, a tendency to graphic design, trendy or otherwise.

"I realised that I drew in pictures that told stories in my mind. As a child I used to draw them in the back of my father's old scripts.

"My ambition now is to draw as many picture books as I can. The next is based on a medieval ballad and I have written the text as well."

Caption: a drawing from the little Mo he by Joanna Troughton, published by Macmillan & Co. £1.05