This Frankenstein is really such a gentleman 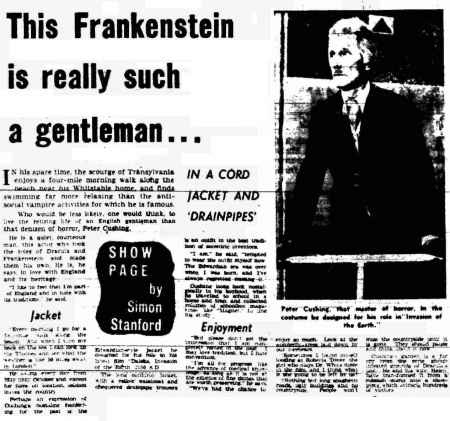 In his spare time, the scourge of Transylvania enjoys a four mile morning walk along the beach near his Whitstable home, and find swimming far more relaxing than the antisocial vampire activities for which she is famous.

Who would be less likely, one would think, to leave the retiring life of an English gentleman then the denizen of horror, Peter Cushing.

He is a quiet, courteous man, this actor who took the roles of Dracula and Frankenstein and made them his own. He is, he says, in love with England and its heritage.

"I like to feel that I'm part of England and in tune with its traditions," he said.

"Every morning I go for a four-mile walk along the beach. And when I turn my back on the sea I can look in the Thames and see what the weather is like 50 miles away in London.

He [?] every day from May until October and except for films on location, seldom leaves the country.

Perhaps an expression of Cushing's nostalgic [?] for the past is the Edwardian-style jacket he designed for his role in his latest film "Daleks, Invasion of the Earth 2150 A.D.

The long corduroy jacket, with a yellow waistcoat and checquered drainpipe trousers is an outfit in the best tradition of eccentric inventors.

"I am," he said, "tempted to wear the outfit myself now. The Edwardian era was over when I was born, and I've always regretted missing it."

Cushing looks back nostalgically to his boyhood when he traveled to school in a horse and trapped and collected volumes of the schoolboy a magazine like magnets to something his study.

"But please don't get the impression that I'm completely rooted in the past. I'm a lot of tradition, but I hate convention.

"I'm all for progress like the advance of medical knowledge, so long as it's not at the expense of fine things that are worth preserving," he says.

We've had the chance to enjoy so much. Look at the wonderful [?] laid down by our forebears.

"Sometimes I remind myself looking at Roberta Tovey the girl who plays Dr. Who's niece in the film and I think what is she going to be left by us.

"Nothing but long spaghetti roads, ugly buildings and no countryside. People won't miss the countryside until it is gone. They should pause and think about it now."

Cushing's garden is a far cry from the ghost infested grounds of Dracula's lair. He and his wife, Helen, have transformed it from all rubbish dump into a showpiece, which attracts hundreds of visitors.

Caption: Peter Cushing, that master of horror, in the costume he designed for his role in invasion of the earth.