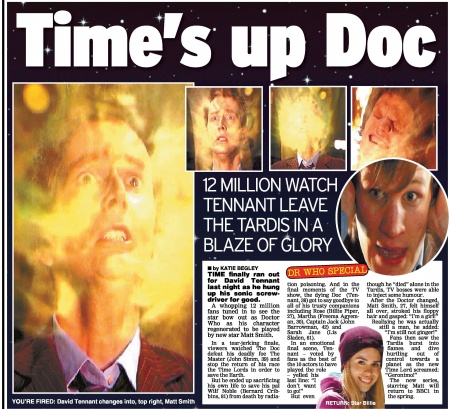 TIME finally ran out for David Tennant last night as he hung up his sonic screwdriver for good.

A whopping 12 million fans tuned in to see the star bow out as Doctor Who as his character regenerated to be played by new star Matt Smith.

In a tear-jerking finale, ciewers watched The Doc defeat his deadly foe The Master (John Simm, 39) and stop the return of his race he Time Lords in order to save the Earth.

But he ended up sacrificing its own life to save his pal Will Noble (Bernard Cribbins, 81) from death by radiation poisoning. And in the final moments of the TV show, the dying Doc (Tennant, 38) got to say goodbye to all of his trusty companions including Rose (Billie Piper, 27), Martha (Freema Agyeman, 30), Captain Jack (John Barrowman, 42) and Sarah Jane (Lis Sladen, 61).

In an emotional final scene, Tennant — voted by fans as the best of the 10 actors to have played the role — yelled his last line: "I don't want to go!"

But even though he "died" alone in the Tardis, TV bosses were able to inject some humour.

After the Doctor changed, Matt Smith, 27, felt himself all over, stroked his floppy hair and gasped: "I'm a girl!"

Realising he was actually still a man, he added: "I'm still not ginger!"

Fans then saw the Tardis burst into flames and dive hurtling out of control towards a Time Lord screamed: "Geronimo!"

The new series, starring Matt will return to BBC1 in the spring.