Time-traveling alien from BBC, "Dr. Who' at USF 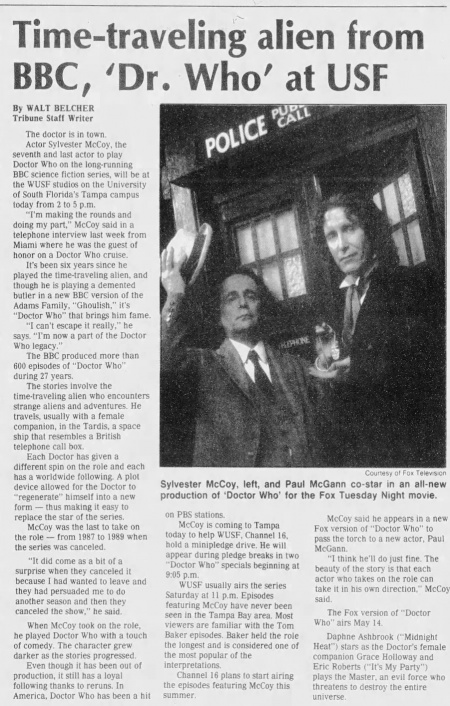 The doctor is in town.

Actor Sylvester McCoy, the seventh and last actor to play Doctor Who on the long-running BBC science fiction series, will be at the WUSF studios on the University of South Florida's Tampa campus today from 2 to 5 p.m.

"I'm making the rounds and doing my part," McCoy said in a telephone interview last week from Miami where he was the guest of honor on a Doctor Who cruise.

It's been six years since he played the time-traveling alien, and though he is playing a demented butler in a new BBC version of the Adams Family, "Ghoulish," it's "Doctor Who" that brings him fame.

The BBC produced more than 600 episodes of "Doctor Who" during 27 years.

The stories involve the time-traveling alien who encounters strange aliens and adventures. He travels, usually with a female companion, in the Tardis, a space ship that resembles a British telephone call box.

Each Doctor has given a different spin on the role and each has a worldwide following. A plot device allowed for the Doctor to "regenerate" himself into a new form - thus making it easy to replace the star of the series.

When McCoy took on the role, he played Doctor Who with a touch of comedy. The character grew darker as the stories progressed.

Even though it has been out of production, it still has a loyal following thanks to reruns. In America, Doctor Who has been a hit on PBS stations.

McCoy is coming to Tampa today to help WUSF, Channel 16, hold a minipledge drive. He will appear during pledge breaks in two "Doctor Who" specials beginning at 9:05 p.m.

WUSF usually airs the series Saturday at 11 p.m. Episodes featuring McCoy have never been seen in the Tampa Bay area. Most viewers are familiar with the Tom Baker episodes. Baker held the role the longest and is considered one of the most popular of the interpretations.

McCoy said he appears in a new Fox version of "Doctor Who" to pass the torch to a new actor, Paul McGann.

"I think he'll do just fine. The beauty of the story is that each actor who takes on the role can take it in his own direction," McCoy said.

The Fox version of "Doctor Who" airs May 14.

Daphne Ashbrook ("Midnight Heat") stars as the Doctor's female companion Grace Holloway and Eric Roberts ("It's My Party") plays the Master, an evil force who threatens to destroy the entire universe.