Time Has Run Out for Dr Who Patrick 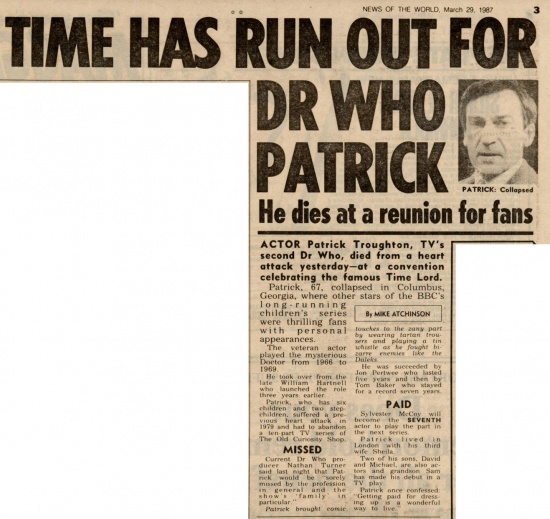 He dies at a reunion for fans

Patrick, 67, collapsed in Columbus, Georgia, where other stars of the BBC's long-running children's series were thrilling fans with personal appearances.

The veteran actor played the mysterious Doctor from 1966 to 1969.

He took over from the late William Hartnell who launched the role three years earlier.

Patrick, who has six children and two stepchildren, suffered a previous heart attack in 1979 and had to abandon a ten-part TV series of The Old Curiosity Shop.

Current Dr Who producer Nathan Turner said last night that Patrick would be "sorely missed by the profession in general and the show's 'family' in particular."

Patrick brought comic touches to the zany part by wearing tartan trousers and playing a tin whistle as he fought bizarre enemies like the Daleks.

He was succeeded by Jon Pertwee who lasted five years and then by Tom Baker who stayed for a record seven years.

Sylvester McCoy will become the SEVENTH actor to play the part in the next series.

Patrick lived in London with his third wife Sheila.

Two of his sons, David and Michael, are also actors and grandson Sam has made his debut in a TV play.

Patrick once confessed: "Getting paid for dressing up is a wonderful way to live."