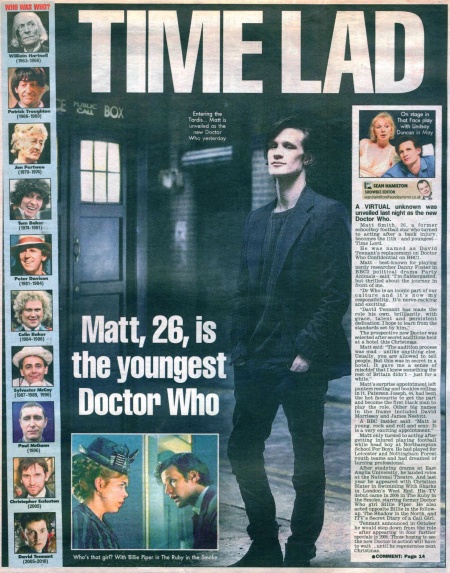 Matt, 26, Is The Youngest Doctor Who

A VIRTUAL unknown was unveiled last night as the new Doctor Who.

Matt Smith, 26, a former schoolboy football star who turned to acting after a back injury, becomes the 11th - and youngest - Time Lord.

He was named as David Tennant's replacement on Doctor Who Confidential on BBC1.

Matt - best-known for playing nerdy researcher Danny Foster in BBC2 political drama Party Animals - said: "I'm flabbergasted, but thrilled about the journey in front of me.

"Dr Who is an iconic part of our culture and it's now my responsibility. It's nerve-racking and exciting.

"David Tennant has made the role his own, brilliantly, with grace, talent and persistent dedication. I hope to learn from the standards set by him."

The prospective new Doctor was selected after secret auditions held at a hotel this Christmas.

Matt said: "The audition process was mad - unlike anything else.

Usually, you are allowed to tell people. But this was in secret in a hotel. It gave me a sense of mischief that I knew something the rest of Britain didn't - just for a while."

Matt's surprise appointment left punters reeling and bookies rolling in it. Paterson Joseph, 44, had been the hot favourite to get the part and become the first black man to play the role. Other big names in the frame included David Morrissey and James Nesbitt.

A BBC insider said: "Matt is young, rock and roll and sexy. It is a very exciting appointment."

Matt only turned to acting after getting injured playing football while head boy at Northampton School For Boys. He had played for Leicester and Nottingham Forest youth teams and had dreamed of turning professional.

After studying drama at East Anglia University, he landed roles at the National Theatre. And last year he appeared with Christian Slater in Swimming With Sharks in London's West End. His TV debut came in 2006 in The Ruby in the Smoke, starring former Doctor Who girl Billie Piper. He also acted opposite Billie in the follow-up, The Shadow in the North, and ITV's Secret Diary of a Call Girl.

Tennant announced in October he would step down from the role - after appearing in four further specials in 2009. Those hoping to see the new Doctor in action will have to wait ... until he regenerates next Christmas.