Time Lord Gets Set to Rock the City 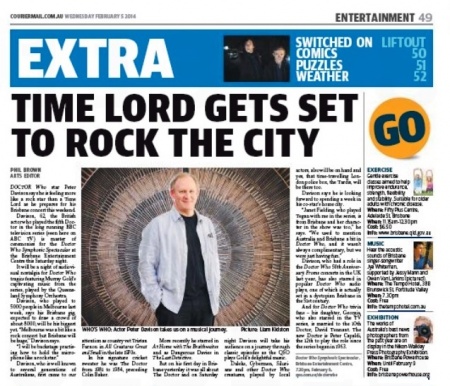 DOCTOR Who star Peter Davison says he is feeling more like a rock star than a Time Lord as he prepares for his Brisbane concert this weekend.

Davison, 62, the British actor who played the fifth Doctor in the long running BBC television series (seen here on ABC TV) is master of ceremonies for the Doctor Who Symphonic Spectacular at the Brisbane Entertainment Centre this Saturday night.

It will be a night of audiovisual nostalgia for Doctor Who tragics featuring Murray Gold's captivating music from the series, played by the Queensland Symphony Orchestra.

Davison, who played to 5000 people in Melbourne last week, says his Brisbane gig, expected to draw a crowd of about 8000, will be his biggest yet. "Melbourne was a bit like a rock concert but Brisbane will be huge," Davison says.

"I will be backstage practising how to hold the microphone like a rock star."

Davison, who is well known to several generations of Australians, first came to our attention as country vet Tristan Farnon in All Creatures Great and Small in the late 1970s.

In his signature cricket sweater he was The Doctor from 1981 to 1984, preceding Colin Baker.

More recently he starred in At Home with The Braithwaites and as Dangerous Davies in The Last Detective.

But on his first day in Brisbane yesterday it was all about The Doctor and on Saturday night Davison will take his audience on a journey through classic episodes as the QSO plays Gold's delightful music.

Daleks, Cybermen, Silurians and other Doctor Who creatures, played by local actors, also will be on hand and yes, that time-travelling London police box, the Tardis, will be there too.

Davison says he is looking forward to spending a week in his co-star's home city.

"Janet Fielding, who played Tegan with me in the series, is from Brisbane and her character in the show was too," he says. "We used to mention Australia and Brisbane a bit in Doctor Who, and it wasn't always complimentary, but we were just having fun."

Davison, who had a role in the Doctor Who 50th Anniversary Proms concerts in the UK last year, has also starred in popular Doctor Who audio plays, one of which is actually set in a dystopian Brisbane in the 51st century.

And for Doctor Who trivia fans – his daughter, Georgia, who also starred in the TV series, is married to the 10th Doctor, David Tennant. The new Doctor is Peter Capaldi, the 12th to play the role since the series began in 1963. Doctor Who Symphonic Spectacular, Brisbane Entertainment Centre, 7.30pm, February 8. qso.com.au/doctorwho

Picture: Liam Kidston WHO'S WHO: Actor Peter Davison takes us on a musical journey.