Time Lord travels to the Nineties 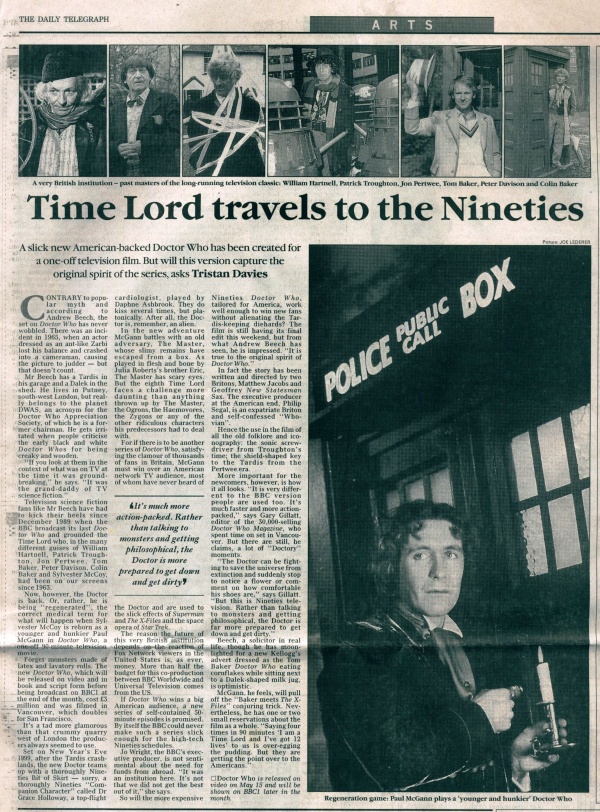 A slick new American-backed Doctor Who has been created for a one-off television film. But will this version capture the original spirit of the series, asks Tristan Davies

CONTRARY to popular myth and according to Andrew Beech, the set on Doctor Who has never wobbled. There was an incident in 1965, when an actor dressed as an ant-like Zarbi lost his balance and crashed into a cameraman, causing the picture to judder — but that doesn't count.

Mr Beech has a Tardis in his garage and a Dalek in the shed. He lives in Putney, south-west London, but really belongs to the planet DWAS, an acronym for the Doctor Who Appreciation Society, of which he is a former chairman. He gets irritated when people criticise the early black and white Doctor Whos for being creaky and wooden.

"If you look at them in the context of what was on TV at the time it was groundbreaking," he says. "It was the grand-daddy of TV science fiction."

Television science fiction fans like Mr Beech have had to kick their heels since December 1989 when the BBC broadcast its last Doctor Who and grounded the Time Lord who, in the many different guises of William °Hartnell, Patrick Trough-ton, Jon Pertwee, Tom Baker, Peter Davison, Colin Baker and Sylvester McCoy, had been on our screens since 1963.

Now, however, the Doctor is back. Or, rather, he is being "regenerated", the correct medical term for what will happen when Sylvester McCoy is reborn as a younger and hunkier Paul McGann in Doctor Who, a one-off 90-minute television movie.

Forget monsters made of latex and lavatory rolls. The new Doctor Who, which will be released on video and in book and script form before being broadcast on BBC1 at the end of the month, cost £3 - million and was filmed in Vancouver, which doubles for San Francisco.

It's a tad more glamorous than that crummy quarry west of London the producers always seemed to use.

Set on New Year's Eve 1999, after the Tardis crash-lands, the new Doctor teams up with a thoroughly Nineties Bit of Skirt — sorry, a thoroughly Nineties "Companion Character" called Dr Grace Holloway, a top-flight cardiologist, played by Daphne Ashbrook. They do kiss several times, but platonically. After all, the Doctor is, remember, an alien.

In the new adventure McGann battles with an old adversary, The Master, whose slimy remains have escaped from a box. As played in flesh and bone by Julia Roberts's brother Eric, The Master has scary eyes. But the eighth Time Lord faces a challenge more daunting than anything thrown up by The Master, the Ogrons, the Haemovores, the Zygons or any of the other ridiculous characters his predecessors had to deal with.

For if there is to be another series of Doctor Who, satisfying the clamour of thousands of fans in Britain, McGann must win over an American network TV audience, most of whom have never heard of the Doctor and are used to the slick effects of Superman and The X-Files and the space opera of Star Trek.

The reason the future of this very British institution -- depends on--the reaction of Fox Network viewers in the United States is, as ever, money. More than half the budget for this co-production between BBC Worldwide and Universal Television comes from the US.

If Doctor Who wins a big American audience, a new series of self-contained 50-minute episodes is promised. By itself the BBC could never make such a series slick enough for the high-tech Nineties schedules.

Jo Wright, the BBC's executive producer, is not sentimental about the need for funds from abroad. "It was an institution here. It's not that we did not get the best out of it," she says.

So will the more expensive Nineties Doctor Who, tailored for America, work well enough to win new fans without alienating the Tar-dis-keeping diehards? The film is still having its final edit this weekend, but from what Andrew Beech has seen, he is impressed. "It is true to the original spirit of Doctor Who."

In fact the story has been written and directed by two Britons, Matthew Jacobs and Geoffrey New Statesman Sax. The executive producer at the American end, Philip Segal, is an expatriate Briton and self-confessed "Whovian".

Hence the use in the film of all the old folklore and iconography: the sonic screwdriver from Troughton's time; the shield-shaped key to the Tardis from the Pertwee era.

More important for the newcomers, however, is how it all looks. "It is very different to the BBC version people are used too. It's much faster and more action-packed," says Gary Gillatt, editor of the 30,000-selling Doctor Who Magazine, who spent time on set in Vancouver. But there are still, he claims, a lot of "Doctory" moments.

"The Doctor can be fighting to save the universe from extinction and suddenly stop to notice a flower or comment on how comfortable his shoes are," says Gillatt. "But this is Nineties television. Rather than talking to monsters and getting philosophical, the Doctor is far more prepared to get down and get dirty."

Beech, a solicitor in real life, though he has moonlighted for a new Kellogg's advert dressed as the Tom Baker Doctor Who eating cornflakes while sitting next to a Dalek-shaped milk jug, is optimistic.

McGann, he feels, will pull off the "Baker meets The X-Files" conjuring trick. Nevertheless, he has one or two small reservations about the film as a whole. "Saying four times in 90 minutes 'I am a Time Lord and I've got 12 lives' to us is over-egging the pudding. But they are getting the point over to the Americans."

❑Doctor Who is released on video on May 15 and will be shown on BBC1 later in the month.