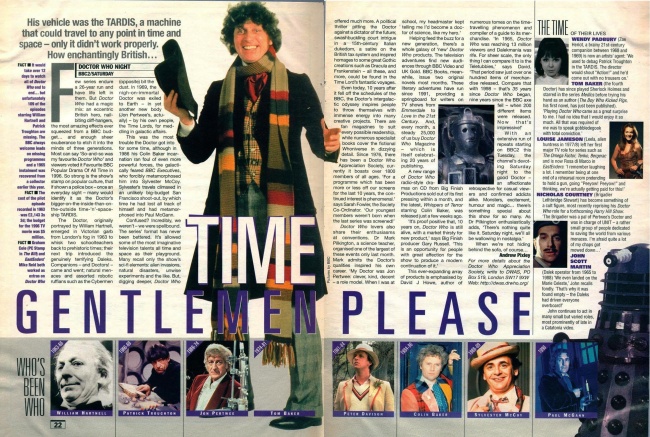 His vehicle was the TARDIS, a machine that could travel to any point in time and space — only it didn't work properly. How enchantingly British...

Few series endure a 26-year run and have life left in them. But Doctor Who had a magic mix: an eccentric British hero, nail-biting cliff-hangers, the most amazing effects ever squeezed from a BBC budget... and enough sheer exuberance to etch it into the minds of three generations. Most can say 'So-and-so was my favourite Doctor Who' and viewers voted it Favourite BBC Popular Drama Of All Time in 1996. So strong is the show's stamp on popular culture, that if shown a police box - once an everyday sight - many would identify it as the Doctor's bigger-on-the-inside-than-on-the-outside time-'n'-spaceship TARDIS.

The Doctor, originally portrayed by William Hartnell, emerged in Victorian garb from London's fog in 1963 to whisk two schoolteachers back to prehistoric times; their next trip introduced the genuinely terrifying Daleks. Companions - and Doctors! came and went; natural menaces and assorted robotic ruffians such as the Cybermen (opposite) bit the dust. In 1969, the nigh-on-immortal Doctor was exiled to Earth - in yet another new body (Jon Pertwee's, actually) - by his own people, the Time Lords, for meddling in galactic affairs.

This was the most trouble the Doctor got into for some time, although in 1986 his Colin Baker incarnation ran foul of even more powerful forces, the galactically feared BBC Executives, who forcibly metamorphosed him into Sylvester McCoy. Sylvester's travels climaxed in an unlikely big-budget San Francisco shoot-out, by which time he had lost all track of himself and had metamorphosed into Paul McGann.

Confused? Incredibly, we weren't - we were spellbound. The series' format has never been bettered. It's allowed some of the most imaginative television talents all time and space as their playground. Many recall only the show's sci-fi elements: alien invasions, natural disasters, unwise experiments and the like. But, digging deeper, Doctor Who offered much more. A political thriller pitting the Doctor against a dictator of the future; swashbuckling court intrigue in a 15th-century Italian dukedom, a satire on the British tax system and inspired homages to some great Gothic creations such as Dracula and Frankenstein - all these, and more, could be found in the Time Lord's fantastic voyages.

Even today, 10 years after it fell off the schedules of the BBC, the Doctor's intergalactic odyssey inspires people to throw themselves with immense energy into many creative projects. There are fan magazines to suit every possible readership, while numerous specialist books cover the fictional Whoniverse in dizzying detail. Since 1976, there has been a Doctor Who Appreciation Society, currently it boasts over 1800 members of all ages. 'For a programme which has been more or less off our screens for the last 10 years, the continued interest is phenomenal.' says Sarah Fowler, the Society Co-Ordinator. 'Our youngest members weren't born when the last series was screened!'

Doctor Who lovers also share their enthusiasms at conventions. Dr Mark Pilkington, a science teacher, organised one of the largest of these events only last month. Mark admits the Doctor's qualities inspired his own career. 'My Doctor was Jon Pertwee: clever, kind, decent - a role model. When I was at school, my headmaster kept telling me I'd become a doctor of science, like my hero.'

Helping feed the buzz for a new generation, there's a whole galaxy of 'new' Doctor Who products. The television adventures find new audiences through BBC Video and UK Gold. BBC Books, meanwhile, issue two original novels most months. These literary adventures have run since 1991, providing a springboard for writers on TV shows from Emmerdale to Love in the 21st Century. And, every month, a steady 25,000 of us buy Doctor Who Magazine - which is itself celebrating 20 years of publishing.

A new range of Doctor Who radio-style dramas on CD from Big Finish Productions sold out of its first pressing within a month, and the latest, Whispers of Terror starring Colin Baker, was released just a few weeks ago.

'It's proof positive that, 10 years on, Doctor Who is still alive, with a market thirsty for new product,' says Big Finish producer Gary Russell. 'This is an opportunity for people with great affection for the show to produce a modern continuation of it.'

This ever-expanding array of products is emphasised by David J Howe, author of numerous tomes on the time-travelling phenomenon and compiler of a guide to its merchandise. 'In 1965, Doctor Who was reaching 13 million viewers and Dalekmania was rife. For sheer scale, the only thing I can compare it to is the Teletubbies,' says David. 'That period saw just over one hundred items of merchandise released. Compare that with 1998 - that's 35 years since Doctor Who began, nine years since the BBC axe fell - when 200 different items were released. Now that's impressive!'

With an extensive run of repeats starting on BBC2 this Tuesday, the channel's devoting Saturday night to the good Doctor an affectionate retrospective for casual viewers and confirmed addicts alike. Monsters, excitement, humour and magic... there's something special about this show for so many. As Dr Pilkington enthusiastically adds, 'There's nothing quite like it. Saturday night, we'll all be wallowing in nostalgia.'

When we're not hiding behind the sofa, of course...

The Time of Their Lives

WENDY PADBURY (Zoe Heriot, a brainy 21st-century companion between 1968 and 1969) is now an artists' agent: 'We used to debag Patrick Troughton in the TARDIS. The director would shout "Action!" and he'd come out with no trousers on.'

TOM BAKER (the fourth Doctor) has since played Sherlock Holmes and starred in the series Medics before trying his hand as an author (The Boy Who Kicked Pigs, his first novel, has just been published). 'Playing Doctor Who came as a great surprise to me. I had no idea that I would enjoy it so much. All that was required of me was to speak gobbledegook with total conviction.'

LOUISE JAMESON (Leela, alien huntress in 1977/8) left her first major TV role for series such as The Omega Factor, Tenko, Bergerac and is now Rosa di Marco in EastEnders: 'I remember laughing a lot. I remember being at one end of a rehearsal room pretending to hold a gun, going "Peeyow! Peeyow!" and thinking, we're actually getting paid for this!'

NICHOLAS COURTNEY (Brigadier Lethbridge Stewart) has become something of a cult figure, most recently reprising his Doctor Who role for a forthcoming Harry Hill Show. 'The Brigadier was a pal of Pertwee's Doctor and was in charge of UNIT — a rather small group of people dedicated to saving the world from various menaces. I'm afraid quite a lot of my chaps got mowed down...'

JOHN SCOTT MARTIN (Dalek operator from 1965 to 1988) 'We even landed on the Marie Celeste,' John recalls fondly. 'That's why it was found empty — the Daleks had driven everyone overboard!'

John continues to act in many small but varied roles, most prominently of late in a Catatonia video.

FACT • It would take over 12 days to watch all of Doctor Who end to end... but unfortunately 109 of the episodes starring William Hartnell and Patrick Troughton are missing. The BBC always welcome leads on missing programmes and a 1965 instalment was recovered from a collector earlier this year.