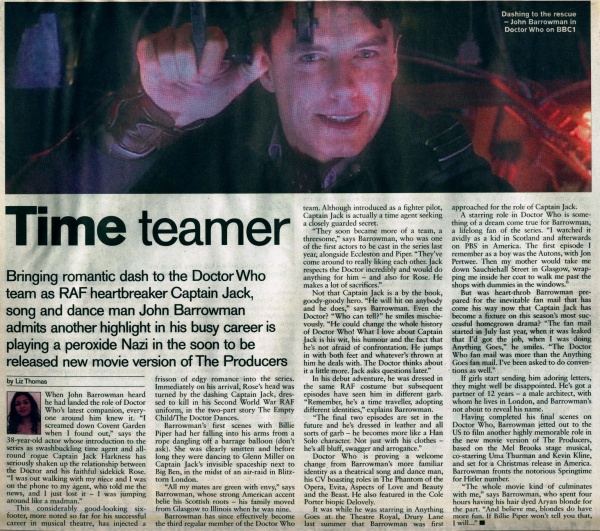 Bringing romantic dash to the Doctor Who team as RAF heartbreaker Captain Jack, song and dance man John Barrowman admits another highlight in his busy career is playing a peroxide Nazi in the soon to be released new movie version of The Producers

When John Barrowman heard he had landed the role of Doctor Who's latest companion, everyone around him knew it. "I screamed down Covent Garden when I found out," says the 38-year-old actor whose introduction to the series as swashbuckling time agent and all-round rogue Captain Jack Harkness has seriously shaken up the relationship between the Doctor and his faithful sidekick Rose. "I was out walking with my niece and I was on the phone to my agent, who told me the news, and I just lost it — I was jumping around like a madman."

This considerably good-looking six-footer, more noted so far for his successful career in musical theatre, has injected a frisson of edgy romance into the series. Immediately on his arrival, Rose's head was turned by the dashing Captain Jack, dressed to kill in his Second World War RAF uniform, in the two-part story The Empty Child/The Doctor Dances.

Barrowman's first scenes with Billie Piper had her falling into his arms from a rope dangling off a barrage balloon (don't ask). She was clearly smitten and before long they were dancing to Glenn Miller on Captain Jack's invisible spaceship next to Big Ben, in the midst of an air-raid in Blitz-torn London.

"All my mates are green with envy," says Barrowman, whose strong American accent belie his Scottish roots — his family moved from Glasgow to Illinois when he was nine.

Barrowman has since effectively become the third regular member of the Doctor Who team. Although introduced as a fighter pilot, Captain Jack is actually a time agent seeking a closely guarded secret.

Not that Captain Jack is a by the book, goody-goody hero. "He will hit on anybody and he does," says Barrowman. Even the Doctor? "Who can tell?" he smiles mischievously. "He could change the whole history of Doctor Who! What I love about Captain Jack is his wit, his humour and the fact that he's not afraid of confrontation. He jumps in with both feet and whatever's thrown at him he deals with. The Doctor thinks about it a little more. Jack asks questions later."

In his debut adventure, he was dressed in the same RAF costume but subsequent episodes have seen him in different garb. "Remember, he's a time traveller, adopting different identities," explains Barrowman.

"The final two episodes are set in the future and he's dressed in leather and all sorts of garb — he becomes more like a Han Solo character. Not just with his clothes —he's all bluff, swagger and arrogance."

Doctor Who is proving a welcome change_ from Barrowman's more familiar identity as a theatrical song and dance man, his CV boasting roles in The Phantom of the Opera, Evita, Aspects of Love and Beauty and the Beast. He also featured in the Cole Porter biopic Delovely.

It was while he was starring in Anything Goes at the Theatre Royal, Drury Lane last summer that Barrowman was first approached for the role of Captain Jack.

A starring role in Doctor Who is something of a dream come true for Barrowman, a lifelong fan of the series. "I watched it avidly as a kid in Scotland and afterwards on PBS in America. The first episode I remember as a boy was the Autons, with Jon Pertwee. Then my mother would take me down Sauchiehall Street in Glasgow, wrapping me inside her coat to walk me past the shops with dummies in the windows."

But was heart-throb Barrowman prepared for the inevitable fan mail that has come his way now that Captain Jack has become a fixture on this season's most successful homegrown drama? "The fan mail started in July last year, when it was leaked that I'd got the job, when I was doing Anything Goes," he smiles. "The Doctor Who fan mail was more than the Anything Goes fan mail. I've been asked to do conventions as well."

If girls start sending him adoring letters, they might well be disappointed. He's got a partner of 12 years — a male architect, with whom he lives in London, and Barrowman's not about to reveal his name.

Having completed his final scenes on Doctor Who, Barrowman jetted out to the US to film another highly memorable role in the new movie version of The Producers, based on the Mel Brooks stage musical, co-starring Uma Thurman and Kevin Kline, and set for a Christmas release in America. Barrowman fronts the notorious Springtime for Hitler number.

"The whole movie kind of culminates with me," says Barrowman, who spent four hours having his hair dyed Aryan blonde for the part. "And believe me, blondes do have more fun. If Billie Piper won't tell you that, I will..."

Caption: Dashing to the rescue — John Barrowman in Doctor Who on BBC1