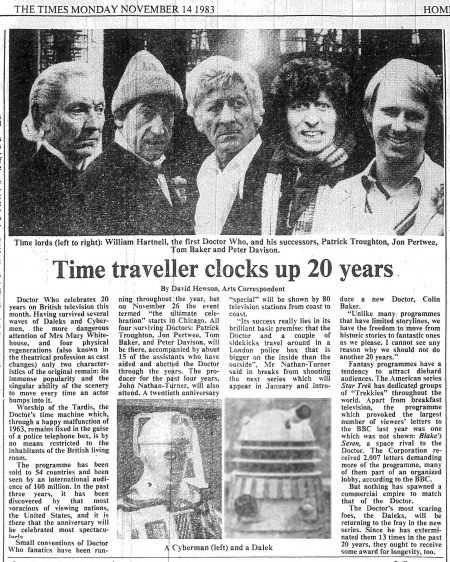 Doctor Who celebrates 20 years on British television this month. Having survived several waves of Daleks and Cybermen, the more dangerous attention of Mrs Mary Whitehouse, and four physical regenerations (also known in the theatrical profession as cast changes) only two characteristics of the original remain: its immense popularity and the singular ability of the scenery to move every time an actor bumps into it.

Worship of the Tardis, the Doctor's time machine which, through a happy malfunction of 1963, remains fixed in the guise of a police telephone box, is by no means restricted to the inhabitants of the British living room.

The programme has been sold to 54 countries and been seen by an international audience of 100 million. In the past three years, it has been discovered by that most voracious of viewing nations, the United States, and it is there that the anniversary will be celebrated most spectacularly.

Small conventions of Doctor Who fanatics have been running throughout the year, but on November 26 the event termed "the ultimate celebration" starts in Chicago. All four surviving Doctors: Patrick Troughton, Jon Pertwee, Tom Baker, and Peter Davison, will be there, accompanied by about 15 of the assistants who have aided and abetted the Doctor through the years. The producer for the past four years, John Nathan-Turner, will also attend. A twentieth anniversary "special" will be shown by 80 television stations from coast to coast.

"Its success really lies in its brilliant basic premise: that the Doctor and a couple of sidekicks travel around in a London police box that is bigger on the inside than the outside", Mr Nathan-Turner said in breaks from shooting the next series which will appear in January and introduce a new Doctor, Colin Baker.

"Unlike many programmes that have limited storylines, we have the freedom to move from historic stories to fantastic ones as we please. I cannot see any reason why we should not do another 20 years."

Fantasy programmes have a tendency to attract diehard audiences. The American series Star Trek has dedicated groups of "Trekkies" throughout the world. Apart from breakfast television, the programme which provoked the largest number of viewers' letters to the BBC last year was one which was not shown: Blake's Seven, a space rival to the Doctor. The Corporation received 2,007 letters demanding more of the programme, many of them part of an organized lobby, according to the BBC.

But nothing has spawned a commercial empire to match that of the Doctor.

The Doctor's most scaring foes, the Daleks, will be returning to the fray in the new series. Since he has exterminated them 13 times in the past 20 years, they ought to receive some award for longevity, too.

Caption: A Cyberman (left) and a Dalek