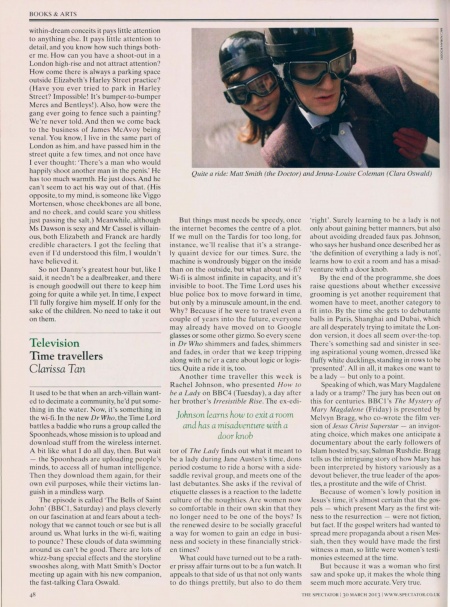 It used to be that when an arch-villain wanted to decimate a community, he'd put something in the water. Now, it's something in the wi-fi. In the new Dr Who, the Time Lord battles a baddie who runs a group called the Spoonheads, whose mission is to upload and download stuff from the wireless internet. A bit like what I do all day, then. But wait — the Spoonheads are uploading people's minds, to access all of human intelligence. Then they download them again, for their own evil purposes, while their victims languish in a mindless warp.

The episode is called 'The Bells of Saint John' (BBC1, Saturday) and plays cleverly on our fascination at and fears about a technology that we cannot touch or see but is all around us. What lurks in the wi-fi, waiting to pounce? These clouds of data swimming around us can't be good. There are lots of whizz-bang special effects and the storyline swooshes along, with Matt Smith's Doctor meeting up again with his new companion, the fast-talking Clara Oswald.

But things must needs be speedy, once the internet becomes the centre of a plot. If we mull on the Tardis for too long, for instance, we'll realise that it's a strangely quaint device for our times. Sure, the machine is wondrously bigger on the inside than on the outside, but what about wi-fi? Wi-fi is almost infinite in capacity. and it's invisible to boot. The Time Lord uses his blue police box to move forward in time, but only by a minuscule amount, in the end. Why? Because if he were to travel even a couple of years into the future, everyone may already have moved on to Google glasses or some other gizmo. So every scene in Dr Who shimmers and fades, shimmers and fades, in order that we keep tripping along with ne'er a care about logic or logistics. Quite a ride it is, too.

Another time traveller this week is Rachel Johnson, who presented How to be a Lady on BBC4 (Tuesday), a day after her brother's Irresistible Rise. The ex-editor of The Lady finds out what it meant to be a lady during Jane Austen's time, dons period costume to ride a horse with a sidesaddle revival group, and meets one of the last debutantes. She asks if the revival of etiquette classes is a reaction to the ladette culture of the noughties. Are women now so comfortable in their own skin that they no longer need to be one of the boys? Is the renewed desire to be socially graceful a way for women to gain an edge in business and society in these financially stricken times?

What could have turned out to be a rather prissy affair turns out to be a fun watch. It appeals to that side of us that not only wants to do things prettily, but also to do them 'right'. Surely learning to be a lady is not only about gaining better manners, but also about avoiding dreaded faux pas. Johnson, who says her husband once described her as 'the definition of everything a lady is not', learns how to exit a room and has a misadventure with a door knob.

By the end of the programme, she does raise questions about whether excessive grooming is yet another requirement that women have to meet, another category to fit into. By the time she gets to debutante balls in Paris, Shanghai and Dubai, which are all desperately trying to imitate the London version, it does all seem over-the-top. There's something sad and sinister in seeing aspirational young women, dressed like fluffy white ducklings, standing in rows to be 'presented'. All in all, it makes one want to be a lady — but only to a point.

Speaking of which, was Mary Magdalene a lady or a tramp? The jury has been out on this for centuries. BBC1's The Mystery of Mary Magdalene (Friday) is presented by Melvyn Bragg, who co-wrote the film version of Jesus Christ Superstar — an invigorating choice, which makes one anticipate a documentary about the early followers of Islam hosted by, say, Salman Rushdie. Bragg tells us the intriguing story of how Mary has been interpreted by history variously as a devout believer, the true leader of the apostles, a prostitute and the wife of Christ.

Because of women's lowly position in Jesus's time, it's almost certain that the gospels — which present Mary as the first witness to the resurrection — were not fiction, but fact. If the gospel writers had wanted to spread mere propaganda about a risen Messiah, then they would have made the first witness a man, so little were women's testimonies esteemed at the time.

But because it was a woman who first saw and spoke up, it makes the whole thing seem much more accurate. Very true.