Timeless appeal of Who's Brigadier 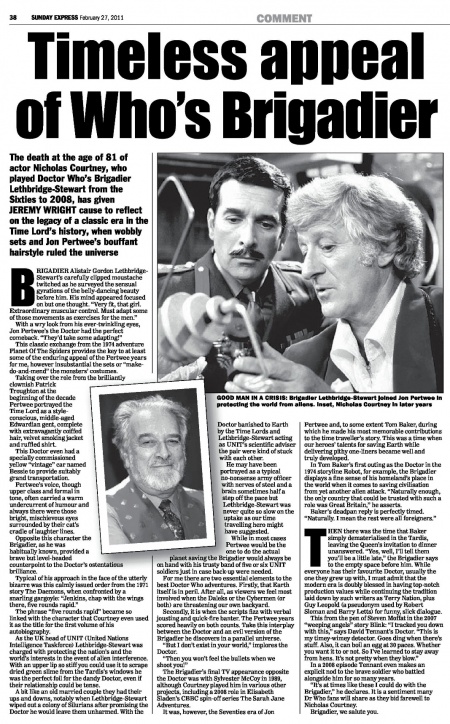 The death at the age of 81 of actor Nicholas Courtney, who played Doctor Who's Brigadier Lethbridge-Stewart from the Sixties to 2008, has given JEREMY WRIGHT cause to reflect on the legacy of a classic era in the Time Lord's history, when wobbly sets and Jon Pertwee's bouffant hairstyle ruled the universe

BRIGADIER Alistair Gordon Lethbridge Stewart's carefully clipped moustache twitched as he surveyed the sensual gyrations of the belly-dancing beauty before him. His mind appeared focused on but one thought. "Very fit, that girl.

Extraordinary muscular control. Must adapt some of those movements as exercises for the men."

With a wry look from his ever-twinkling eyes, Jon Pertwee's the Doctor had the perfect comeback. "They'd take some adapting!"

This classic exchange from the 1974 adventure Planet Of The Spiders provides the key to at least some of the enduring appeal of the Pertwee years for me, however insubstantial the sets or "make do-and-mend" the monsters' costumes.

Taking over the role from the brilliantly clownish Patrick Troughton at the beginning of the decade Pertwee portrayed the Time Lord as a style-conscious, middle-aged Edwardian gent, complete with extravagantly coiffed hair, velvet smoking jacket and ruffled shirt.

Pertwee's voice, though upper class and formal in tone, often carried a warm undercurrent of humour and always there were those bright, mischievous eyes surrounded by their cat's cradle of laughter lines.

Opposite this character the Brigadier, as he was habitually known, provided a brave but level-headed counterpoint to the Doctor's ostentatious brilliance.

Typical of his approach in the face of the utterly bizarre was this calmly issued order from the 1971 story The Daemons, when confronted by a snarling gargoyle: "Jenkins, chap with the wings there, five rounds rapid."

The phrase "five rounds rapid" became so linked with the character that Courtney even used it as the title for the first volume of his autobiography.

As the UK head of UNIT (United Nations Intelligence Taskforce) Lethbridge-Stewart was charged with protecting the nation's and the world's interests in the event of alien interference.

With an upper lip so stiff you could use it to scrape dried green slime from the Tardis's windows he was the perfect foil for the dandy Doctor, even if their relationship could be tense.

A bit like an old married couple they had their ups and downs, notably when Lethbridge-Stewart wiped out a colony of Silurians after promising the Doctor he would leave them unharmed. With the Doctor banished to Earth by the Time Lords and Lethbridge-Stewart acting as UNIT's scientific adviser the pair were kind of stuck with each other.

He may have been portrayed as a typical no-nonsense army officer with nerves of steel and a brain sometimes half a step off the pace but Lethbridge-Stewart was never quite so slow on the uptake as our time travelling hero might have suggested.

While in most cases Pertwee would be the one to do the actual planet saving the Brigadier would always be on hand with his trusty band of five or six UNIT soldiers just in case back-up were needed.

For me there are two essential elements to the best Doctor Who adventures. Firstly, that Earth itself is in peril. After all, as viewers we feel most involved when the Daleks or the Cybermen (or both) are threatening our own backyard.

Secondly, it is when the scripts fizz with verbal jousting and quick-fire banter. The Pertwee years scored heavily on both counts. Take this interplay between the Doctor and an evil version of the Brigadier he discovers in a parallel universe.

"But I don't exist in your world," implores the Doctor.

"Then you won't feel the bullets when we shoot you!"

The Brigadier's final TV appearance opposite the Doctor was with Sylvester McCoy in 1989, although Courtney played him in various other projects, including a 2008 role in Elisabeth Sladen's CBBC spin-off series The Sarah Jane Adventures.

It was, however, the Seventies era of Jon Pertwee and, to some extent Tom Baker, during which he made his most memorable contributions to the time traveller's story. This was a time when our heroes' talents for saving Earth while delivering pithy one-liners became well and truly developed.

In Tom Baker's first outing as the Doctor in the 1974 storyline Robot, for example, the Brigadier displays a fine sense of his homeland's place in the world when it comes to saving civilisation from yet another alien attack. "Naturally enough, the only country that could be trusted with such a role was Great Britain, " he asserts.

"Naturally. I mean the rest were all foreigners."

THEN there was the time that Baker simply dematerialised in the Tardis, leaving the Queen's invitation to dinner unanswered. "Yes, well, I'll tell them you'll be a little late, " the Brigadier says to the empty space before him. While everyone has their favourite Doctor, usually the one they grew up with, I must admit that the modern era is doubly blessed in having top-notch production values while continuing the tradition laid down by such writers as Terry Nation, plus Guy Leopold (a pseudonym used by Robert Sloman and Barry Letts) for funny, slick dialogue.

This from the pen of Steven Moffat in the 2007 "weeping angels" story Blink: "I tracked you down with this, " says David Tennant's Doctor. "This is my timey-wimey detector. Goes ding when there's stuff. Also, it can boil an egg at 30 paces. Whether you want it to or not. So I've learned to stay away from hens. It's not pretty when they blow."

In a 2008 episode Tennant even makes an explicit nod to the brave soldier who battled alongside him for so many years.

"It's at times like these I could do with the Brigadier, " he declares. It is a sentiment many Dr Who fans will share as they bid farewell to Nicholas Courtney.

Brigadier, we salute you.