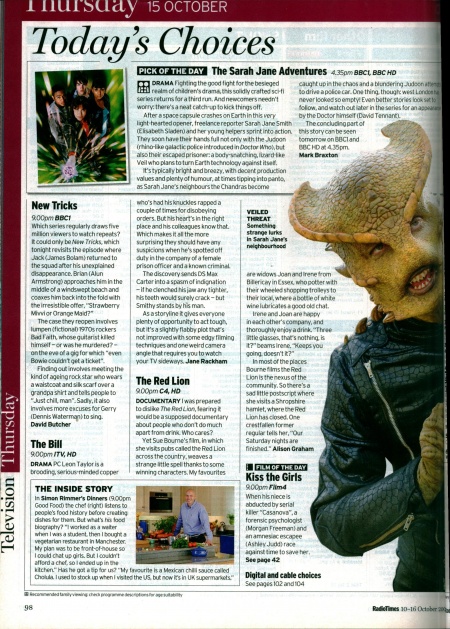 Fighting the good fight for the besieged realm of children's drama, this solidly crafted sci-fi series returns for a third run. And newcomers needn't worry: there's a neat catch-up to kick things off.

After a space capsule crashes on Earth in this very light-hearted opener, freelance reporter Sarah Jane Smith (Elisabeth Sladen) and her young helpers sprint into action.

They soon have their hands full not only with the Judoon (rhino-like galactic police introduced in Doctor Who), but also their escaped prisoner: a body-snatching, lizard-like Veil who plans to turn Earth technology against itself.

It's typically bright and breezy, with decent production values and plenty of humour, at times tipping into panto, as Sarah Jane's neighbours the Chandras become caught up in the chaos and a blundering Judoon attempts to drive a police car. One thing, though: west London has never looked so empty! Even better stories look set to follow, and watch out later in the series for an appearance by the Doctor himself (David Tennant).

The concluding part of this story can be seen tomorrow on BBC1 and BBC HD at 4.35pm.