Tom Quits--now a woman Dr Who? 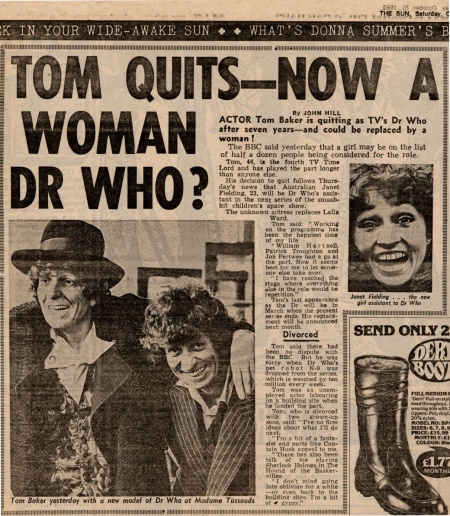 ACTOR Tom Baker is quitting as TV's Dr Who after seven years and could be replaced by a woman !

The BBC said yesterday that a girl may be on the list of half a dozen people being considered for the role.

Tom, 46, is the fourth TV Time Lord and has played the part longer than anyone else.

His decision to quit follows Thursday's news that Australian Janet Fielding, 23, will be Dr Who's assistant in the next series of the smash-hit children's space show.

Tom said: "Working on the programme has been the happiest time of my life.

"William Hartnell, Patrick Troughton and Jon Pertwee had a go at the part. Now it seems best for me to let someone else take over.

"I have reached the stage where everything else in the role would be repetition."

Tom's last appearance as the Dr will be in March when the present series ends. His replacement will be announced next month.

Tom said there had been no dispute with the BBC. But he was sorry when Dr Who's pet robot K-9 was dropped from the series, which is watched by ten million every week.

Tom was an unemployed actor laboring on a building site when he landed the part.

Tom, who is divorced with two grown-up sons, said: "I've no firm ideas about what I'll do next.

"I'm a bit of a fantasist and parts like Captain Hook appeal to me.

"There has also been talk of me playing Sherlock Holmes in The Hound of the Baskervilles.

I don't mind going Into oblivion for a while—or even, back, to the building sites. I m a bit of a gypsy."

Caption: Tom Baker yesterday with a new mode! of Dr Who at Madame Tussauds

Caption: Janet Fielding ... the new girl assistant to Dr Who