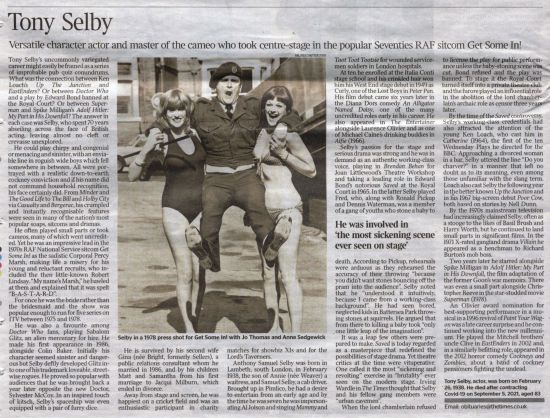 Versatile character actor and master of the cameo who took centre-stage in the popular Seventies RAF sitcom Get Some In!

Tony Selby's uncommonly variegated career might easily be framed as a series of improbable pub quiz conundrums. What was the connection between Ken Loach's Up The Junction and EastEnders? Or between Doctor Who and a play by Edward Bond banned at the Royal Court? Or between Superman and Spike Milligan's Adolf Hitler: My Part in His Downfall? The answer in each case was Selby, who spent 70 years abseiling across the face of British acting, leaving almost no cleft or crevasse unexplored.

He could play chirpy and congenial or menacing and sinister, with an enviable line in roguish wide boys which fell somewhere in between. All were portrayed with a realistic down-to-earth cockney conviction and if his name did not command household recognition, his face certainly did. From Minder and The Good Life to The Bill and Holby City via Casualty and Bergerac, his crumpled and instantly recognisable features were seen in many of the nation's most popular soaps, sitcoms and dramas.

He often played small parts or took cameos, many of which went uncredited. Yet he was an impressive lead in the 1970s RAF National Service sitcom Get Some In! as the sadistic Corporal Percy Marsh, making life a misery for his young and reluctant recruits, who included the then little-known Robert Lindsay. "My name's Marsh;' he bawled at them and explained that it was spelt "B-A-S-T-A-R-D".

For once he was the bride rather than the bridesmaid and the show was popular enough to run for five series on ITV between 1975 and 1978.

He was also a favourite among Doctor Who fans, playing Sabalom Glitz, an alien mercenary for hire. He made his first appearance in 1986, alongside Colin Baker. Initially his character seemed sinister and dangerous but Selby deftly developed Glitz into one of his trademark loveable, streetwise rogues. He proved so popular with audiences that he was brought back a year later opposite the new Doctor, Sylvester McCoy. In an inspired touch of kitsch, Selby's spaceship was even equipped with a pair of furry dice.

He is survived by his second wife Gina (née Bright, formerly Sellers), a public relations consultant whom he married in 1986, and by his children Matt and Samantha from his first marriage to Jacqui Milburn, which ended in divorce.

Away from stage and screen, he was happiest on a cricket field and was an enthusiastic participant in charity matches for showbiz XIs and for the Lord's Taverners.

Anthony Samuel Selby was born in Lambeth, south London, in February 1938, the son of Annie (née Weaver) a waitress, and Samuel Selby, a cab driver. Brought up in Pimlico, he had a desire to entertain from an early age and by the time he was seven he was impersonating Al Jolson and singing Mammy and Toot Toot Tootsie for wounded servicemen soldiers in London hospitals.

At ten he enrolled at the Italia Conti stage school and his crinkled hair won him his West End stage debut in 1949 as Curly, one of the Lost Boys in Peter Pan. His film debut came six years later in the Diana Dors comedy An Alligator Named Daisy, one of the many uncredited roles early in his career. He also appeared in The Entertainer alongside Laurence Olivier and as one of Michael Caine's drinking buddies in Alfie (1966).

Selby's passion for the stage and serious drama was strong and he was in demand as an authentic working-class voice, playing in Brendan Behan for Joan Littlewood's Theatre Workshop and taking a leading role in Edward Bond's notorious Saved at the Royal Court in 1965. In the latter Selby played Fred, who, along with Ronald Pickup and Dennis Waterman, was a member of a gang of youths who stone a baby to death. According to Pickup, rehearsals were arduous as they rehearsed the accuracy of their throwing "because you didn't want stones bouncing off the pram into the audience". Selby noted that he "understood it intuitively, because I came from a working-class background". He had seen bored, neglected kids in Battersea Park throwing stones at squirrels. He argued that from there to killing a baby took "only . one little leap of the imagination".

It was a leap few others were prepared to make. Saved is today regarded as a masterpiece that redefined the possibilities of stage drama. Yet theatre critics at the time were vituperative. One called it the most "sickening and revolting" exercise in "brutality" ever seen on the modern stage. Irving Wardle in The Times thought that Selby and his fellow gang members were "urban cavemen".

When the lord chamberlain refused to license the play for public performance unless the baby-stoning scene was..., cut, Bond refused and the play was banned. TO stage it the Royal Court turned itself into a private theatre club and the furore played an influential role in the abolition of the lord chamberlain's archaic role as censor three years later.

By the time of the Saved controversy, Selby's working-class credentials had also attracted the attention of the young Ken Loach, who cast him in Catherine (1964), the first of the ten Wednesday Plays he directed for the BBC. Approaching a divorced woman in a bar, Selby uttered the line "Do you charver?" in a manner that left no doubt as to its meaning, even among those unfamiliar with the slang term. Loach also cast Selby the following year in the better known Up the Junction and in his 1967 big-screen debut Poor Cow, both based on stories by Nell Dunn.

By the 1970s mainstream television had increasingly claimed Selby, often as a stooge to the likes of Basil Brush and Harry Worth, but he continued to land small parts in significant films. In the 1971 X-rated gangland drama Villain he appeared as a henchman to Richard Burton's mob boss.

Two years later he starred alongside Spike Milligan in Adolf Hitler: My Part in His Downfall, the film adaptation of the former Goon's war memoirs. There was even a small part alongside Christopher Reeve in the star-studded movie Superman (1978).

An Olivier award nomination for best-supporting performance in a musical in a 1996 revival of Paint Your Wagon was a late career surprise and he continued working into the new millennium. He played the Mitchell brothers' uncle Clive in EastEnders in 2002 and, in a similarly befitting role, appeared in the 2012 horror comedy Cockneys and Zombies, about a band of cockney pensioners fighting the undead.

Caption: Selby in a 1978 press shot for Get Some In! with Jo Thomas and Anne Sedgewick