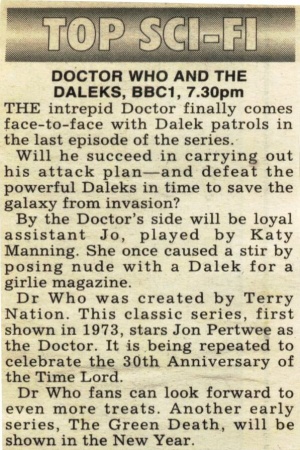 THE intrepid Doctor finally comes face-to-face with Dalek patrols in the last episode of the series.

Will he succeed in carrying out his attack plan—and defeat the powerful Daleks in time to save the galaxy from invasion?

By the Doctor's side will be loyal assistant Jo, played by Katy Manning. She once caused a stir by posing nude with a Dalek for a girlie magazine.

Dr Who was created by Terry Nation. This classic series, first shown in 1973, stars Jon Pertwee as the Doctor. It is being repeated to celebrate the 30th Anniversary of the Time Lord.

Dr Who fans can look forward to even more treats. Another early series, The Green Death, will be shown in the New Year.