Top off Christmas Day with BBC's 'Doctor Who Christmas Special' 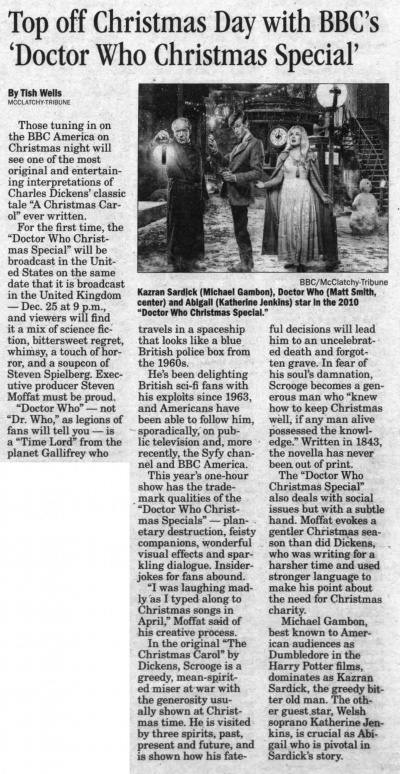 Those tuning in on the BBC America on Christmas night will see one of the most original and entertaining interpretations of Charles Dickens' classic tale "A Christmas Carol" ever written.

For the first time, the "Doctor Who Christmas Special" will be broadcast in the United States on the same date that it is broadcast in the United Kingdom — Dec. 25 at 9 p.m., and viewers will find it a mix of science fiction, bittersweet regret, whimsy, a touch of horror, and a soupcon of Steven Spielberg. Executive producer Steven Moffat must be proud.

"Doctor Who" — not "Dr. Who," as legions of fans will tell you — is a "Time Lord" from the planet Gallifrey who travels in a spaceship that looks like a blue British police box from the 1960s.

He's been delighting British sci-fi fans with his exploits since 1963, and Americans have been able to follow him, sporadically; on public television and, more recently, the Syfy channel and BBC America.

"I was laughing madly as I typed along to Christmas songs in April," Moffat said of his creative process.

In the original "The Christmas Carol" by Dickens, Scrooge is a greedy, mean-spirited miser at war with the generosity usually shown at Christmas time. He is visited by three spirits, past, present and future, and is shown how his fateful decisions will lead him to an uncelebrated death and forgotten grave. In fear of his soul's damnation, Scrooge becomes a generous man who "knew how to keep Christmas well, if any man alive possessed the knowledge." Written in 1843, the novella has never been out of print.

The "Doctor Who Christmas Special" also deals with social issues but with a subtle hand. Moffat evokes a gentler Christmas season than did Dickens, who was writing for a harsher time and used stronger language to make his point about the need for Christmas charity.

Michael Gambon, best known to American audiences as Dumbledore in the Harry Potter films, dominates as Kazran Sardick, the greedy bitter old man. The other guest star, Welsh soprano Katherine Jenkins, is crucial as Abigail who is pivotal in Sardick's story.