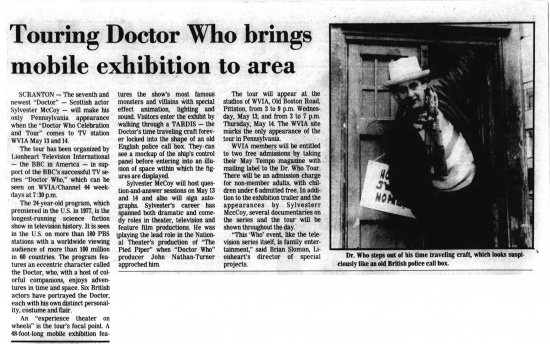 SCRANTON — The seventh and newest "Doctor" — Scottish actor Sylvester McCoy — will make his only Pennsylvania appearance when the "Doctor Who Celebration and Tour" comes to TV station WVIA May 13 and 14.

The tour has been organized by Lionheart Television International — the BBC in America — in support of the BBC's successful TV series "Doctor Who," which can be seen on WVIA/Channel 44 weekdays at 7:30 p.m.

The 24-year-old program, which premiered in the U.S. in 1977, is the longest-running science fiction show in television history. It is seen in the U.S. on more than 180 PBS stations with a worldwide viewing audience of more than 100 million in 60 countries. The program features an eccentric character called the Doctor, who, with a host of colorful companions, enjoys adventures in time and space. Six British actors have portrayed the Doctor, each with his own distinct personality, costume and flair.

An "experience theater on wheels" is the tour's focal point. A 48-foot-long mobile exhibition features the show's most famous monsters and villains with special effect animation, lighting and sound. Visitors enter the exhibit by walking through a TARDIS — the Doctor's time traveling craft forever locked into the shape of an old English police call box. They. can see a mockup of the ship's control panel before entering into an illusion of space within which the figures are displayed.

Sylvester McCoy will host question-and-answer sessions on May 13 and 14 and also will sign autographs. Sylvester's career has spanned both dramatic and comedy roles in theater, television and feature film productions. He was splaying the lead role in the National Theater's production of "The Pied Piper" when "Doctor Who" producer John Nathan-Turner approched him.

The tour will appear at the studios of WVIA, Old Boston Road, Pittston, from 3 to 9 p.m. Wednesday, May 13, and from 3 to 7 p.m. Thursday, May 14. The WVIA site marks the only appearance of the tour in Pennsylvania.

WVIA members will be entitled to two free admissions by taking their May Tempo magazine with mailing label to the Dr. Who Tour. There will be an admission charge for non-member adults, with children under 6 admitted free. In addition to the exhibition trailer and the appearances by Sylvesterr MccCoy, several documentaries on the series and the tour will be shown throughout the day.

"This 'Who' event, like the television series itself, is family entertainment," said Brian Sloman, Lionheart's director of special projects.

Caption: Dr. Who steps out of his time traveling craft, which looks suspiciously like an old British police call box.