Toy collector in the money after auction 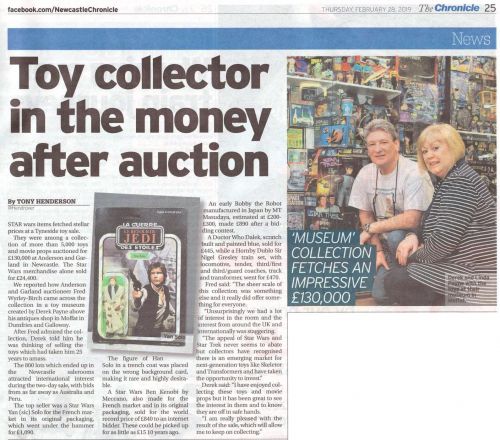 They were among a collection of more than 5,000 toys and movie props auctioned for £130,000 at Anderson and Garland in Newcastle. The Star Wars merchandise alone sold for £24,400.

We reported how Anderson and Garland auctioneer Fred Wyrley-Birch came across the collection in a toy museum created by Derek Payne above his antiques shop in Moffat in Dumfries and Galloway.

After Fred admired the collection, Derek told him he was thinking of selling the toys which had taken him 25 years to amass.

The 800 lots which ended up in the Newcastle salerooms attracted international interest during the two-day sale, with bids from as far away as Australia and Peru.

The top seller was a Star Wars Yan (sic) Solo for the French market in its original packaging, which went under the hammer for £1,090.

The figure of Han Solo in a trench coat was placed on the wrong background card, making it rare and highly desirable.

A Star Wars Ben Kenobi by Meccano, also made for the French market and in its original packaging, sold for the world record price of £840 to an interne bidder. These could be picked up for as little as £15 10 years ago. An early Robby the Robot manufactured in Japan by MT Masudaya, estimated at £200-£300, made £890 after a bidding contest.

A Doctor Who Dalek, scratch built and painted blue, sold for £445, while a Homby Dublo Sir Nigel Gresley train set, with locomotive, tender, third/first and third/guard coaches, track and transformer, went for £470.

Fred said: "The sheer scale of this collection was something else and it really did offer something for everyone.

"Unsurprisingly we had a lot of interest in the room and the interest from around the UK and internationally was staggering. "The appeal of Star Wars and Star Trek never seems to abate but collectors have recognised there is an emerging market for next-generation toys like Skeletor and Transformers and have taken the opportunity to invest!"

Derek said: "I have enjoyed collecting these toys and movie props but it has been great to see the interest in them and to know they are off in safe hands.

"I am really pleased with the result of the sale, which will allow me to keep on collecting."