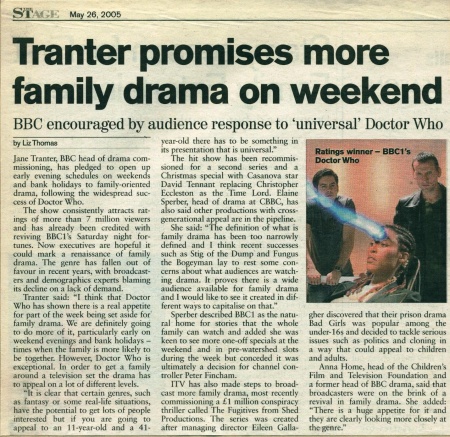 BBC encouraged by audience response to 'universal' Doctor Who

Jane Tranter, BBC head of drama commissioning, has pledged to open up early evening schedules on weekends and bank holidays to family-oriented drama, following the widespread success of Doctor Who.

The show consistently attracts ratings of more than 7 million viewers and has already been credited with reviving BBC1's Saturday night fortunes. Now executives are hopeful it could mark a renaissance of family drama. The genre has fallen out of favour in recent years, with broadcasters and demographics experts blaming its decline on a lack of demand.

Tranter said: "I think that Doctor Who has shown there is a real appetite for part of the week being set aside for' family drama. We are definitely going to do more of it, particularly early on weekend evenings and bank holidays —times when the family is more likely to be together. However, Doctor Who is exceptional. In order to get a family around a television set the drama has to appeal on a lot of different levels.

"It is clear that certain genres, such as fantasy or some real-life situations, have the potential to get lots of people interested but if you are going to appeal to an 11-year-old and a 41- year-old there has to be something in its presentation that is universal."

The hit show has been recommissioned for a second series and a Christmas special with Casanova star David Tennant replacing Christopher Eccleston as the Time Lord. Elaine Sperber, head of drama at CBBC, has also said other productions with cross-generational appeal are in the pipeline.

She said: "The definition of what is family drama has been too narrowly defined and I think recent successes such as Stig of the Dump. and Fungus the Bogeyman lay to rest some concerns about what audiences are watching drama. It proves there is a wide audience available for family drama and I would like to see it created in different ways to capitalise on that."

Sperber described BBC1 as the natural. home for stories that the whole family can watch and added she was keen to see more one-off specials at the weekend and in pre-watershed slots during the week but conceded it was ultimately a decision for channel controller Peter Fincham.

ITV has also made steps to broadcast more family drama, most recently commissioning a £1 million conspiracy thriller called The Fugitives from Shed Productions. The series was created after managing director Eileen Gallagher discovered that their prison drama Bad Girls was popular among the under-16s and decided to tackle serious issues such as politics and cloning in a way that could appeal to children and adults.

Anna Home, head of the Children's Film and Television Foundation and a former head of BBC drama, said that broadcasters were on the brink of a revival in family drama. She added: "There is a huge appetite for it and they are clearly looking more closely at the genre."