Traveler of space, Doctor Who to visit here 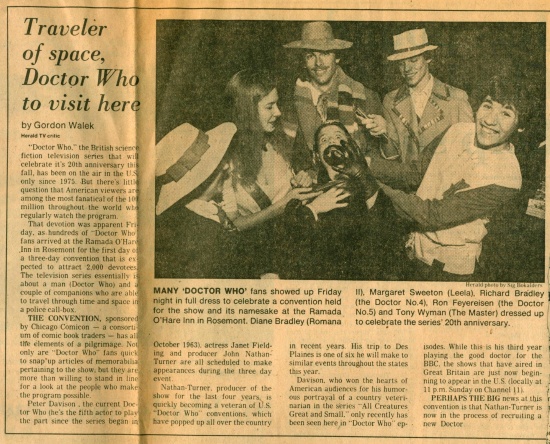 "Doctor Who," the British science fiction television series that will celebrate its 20th anniversary this fall, has been on the air in the U.S. only since 1975. But there's little question that American viewers are among the most fanatical of the 10 million throughout the world who regularly watch the program.

That devotion was apparent Friday as hundreds of "Doctor Who" fans arrived at the Ramada O'Hare Inn in Rosemont for the first day of a three-day convention that is expected to attract 2,000 devotees. The television series essentially is about a man (Doctor Who) and couple of companions who are to travel through time and space in a police call-box.

THE CONVENTION, sponsored by Chicago Comicon — a consortium of comic book traders — has all the elements of a pilgrimage. Not only are "Doctor Who" fans quick to snap up articles of memorabilia pertaining to the show, but they are more than willing to stand in line for a look at the people who make, the program possible.

Peter Davison, the current Doctor Who (he's the fifth actor to play the part since the series began in October 1963), actress Janet Fielding and producer John Nathan-Turner are all scheduled to make appearances during the three day event.

Nathan-Turner. producer of the show for the last four years, is quickly becoming a veteran of U.S. "Doctor Who" conventions, which have popped up all over the country in recent years. His trip to Des Plaines is one of six he will make to similar events throughout the states this year.

Davison, who won the hearts of American audiences for his humorous portrayal of a country veterinarian in the series "All Creatures Great and Small" only recently has been seen herein "Doctor Who" episodes. While this is his third year playing the good doctor for the BBC, the shows that have aired in Great Britain are just now beginning to appear in the U.S. (locally at 11 p.m. Sunday on Channel 11).

PERHAPS THE BIG news at this convention is that Nathan-Turner is now in the process of recruiting a new Doctor.

Caption: MANY 'DOCTOR WHO' fans showed up Friday night in full dress to celebrate a convention held for the show and its namesake at the Ramada O'Hare Inn in Rosemont. Diane Bradley (Romana II), Margaret Sweeton (Leela), Richard Bradley (the Doctor No.4), Ron Feyereisen (the Doctor No.5) and Tony Wyman (The Master) dressed up to celebrate the series' 20th anniversary.