Treat the Doctor with due respect 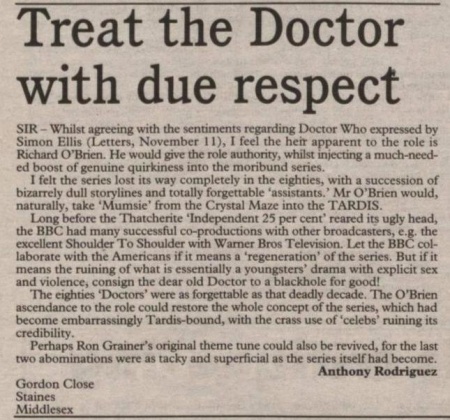 SIR - Whilst agreeing with the sentiments regarding Doctor Who expressed by Simon Ellis (Letters, November 1l), I feel the heir apparent to the role is Richard O'Brien. He would give the role authority, whilst injecting a much-needed boost of genuine quirkiness into the moribund series.

I felt the series lost its way completely in the eighties, with a succession of bizarrely dull storylines and totally forgettable 'assistants.' Mr O'Brien would, naturally, take 'Mumsie' from the Crystal Maze into the TARDIS.

Long before the Thatcherite 'Independent 25 per cent' reared its ugly head, the BBC had many successful co-productions with other broadcasters, e.g. the excellent Shoulder To Shoulder with Warner Bros Television. Let the BBC collaborate with the Americans if it means a 'regeneration' of the series. But if it means the ruining of what is essentially a youngsters' drama with explicit sex and violence, consign the dear old Doctor to a blackhole for good!

The eighties 'Doctors' were as forgettable as that deadly decade. The O'Brien ascendance to the role could restore the whole concept of the series, which had become embarrassingly Tardis-bound, with the crass use of 'celebs' ruining its credibility.

Perhaps Ron Grainer's original theme tune could also be revived, for the last two abominations were as tacky and superficial as the series itself had become.