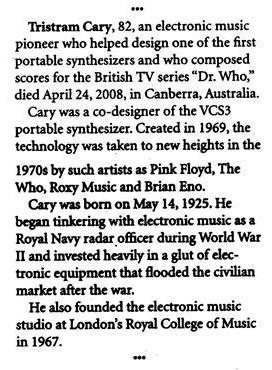 Tristram Cary, 82, an electronic music pioneer who helped design one of the first portable synthesizers and who composed scores for the British TV series "Dr. Who," died April 24, 2008, in Canberra, Australia. Cary was a co-designer of the VCS3 portable synthesizer. Created in 1969, the technology was taken to new heights in the 1970s by such artists as Pink Floyd, The Who, Roxy Music and Brian Eno.

Cary was born on May 14, 1925. He began tinkering with electronic music as a Royal Navy radar officer during World War II and invested heavily in a glut of electronic equipment that flooded the civilian market after the war.

He also founded the electronic music studio at London's Royal College of Music in 1967.