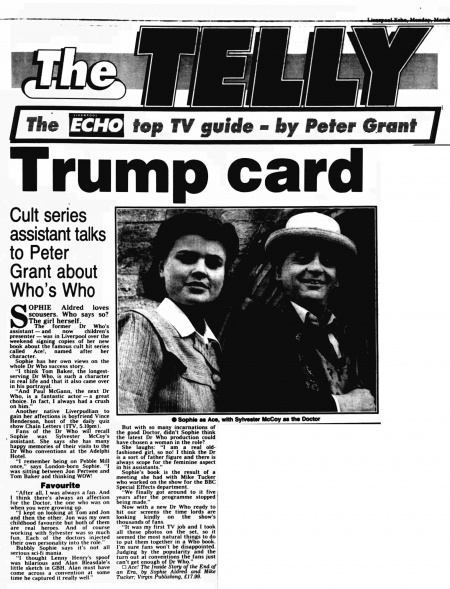 Cult series assistant talks to Peter Grant about Who's Who

SOPHIE Aldred loves scousers. Who says so? The girl herself.

The former Dr Who's assistant — and now children's presenter—was in Liverpool over the weekend signing copies of her new book about the famous cult hit series called Ace!, named after her character.

Sophie has her own views on the whole Dr Who success story.

"I think Tom Baker, the longest-serving Dr Who, is such a character in real life and that it also came over in his portrayal.

"And Paul McGann, the next Dr Who, is a fantastic actor — a great choice. In fact. I always had a crush on him."

Fans of the Dr Who will recall Sophie was Sylvester McCoy's assistant. She says she has many happy memories of their visits to the Dr Who conventions at the Adelphi Hotel.

"I remember being on Pebble Mill once," says London-born Sophie. "I was sitting between Jon Pertwee and Tom Baker and thinking WOW!

"After all, I was always a fan. And I think there's always an affection for the Doctor, the one who was on when you were growing up.

"I kept on looking at Tom and Jon and then the other. Jon was my own childhood favourite but both of them are real heroes. And of course working with Sylvester was so much fun. Each of the doctors injected their own personality into the role."

Bubbly Sophie says it's not all serious sci-fi mania.

"I thought Lenny Henry's spoof was hilarious and Alan Bleasdale's little sketch in GBH. Alan must have come across a convention at some time he captured it really well."

But with so many incarnations of the good Doctor, didn't Sophie think the latest Dr Who production could have chosen a woman in the role?

She laughs: "I am a real old-fashioned girl, so no! I think the Dr is a sort of father figure and there is always scope for the feminine aspect in his assistants."

Sophie's book is the result of a meeting she had with Mike Tucker who worked on the show for the BBC Special Effects department.

"We finally got around to it five years after the programme stopped being made."

Now with a new Dr Who ready to hit our screens the time lords are looking kindly on the show's thousands of fans.

"It was my first TV job and I took all these photos on the set, so it seemed the most natural things to do to put them together in a Who book. I'm sure fans won't be disappointed. Judging by the popularity and the turn out at conventions the fans just can't get enough of Dr Who."

Ace! The Inside Story of the End of an Era, by Sophie Aldred and Mike Tucker; Virgin Publishing, £17.99.

Caption: Sophie as Ace, with Sylvester McCoy as the Doctor