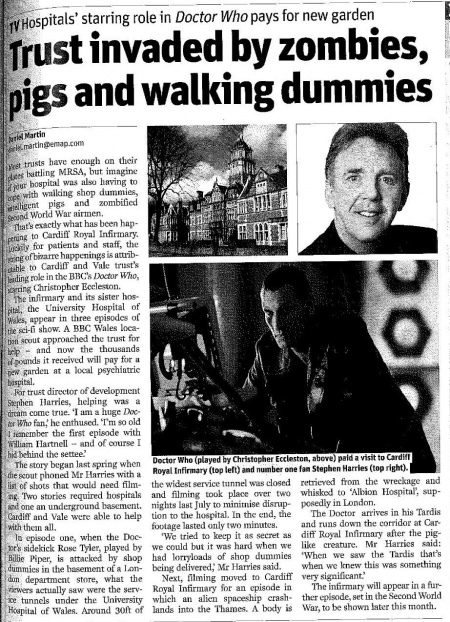 Most mists have enough on their plates battling MRSA, but imagine if your hospital was also having to cope with walking shop dummies, intelligent pigs and zombified Second World War airmen.

That's exactly what has been happening to Cardiff Royal Infirmary. Luckily for patients and staff, the string of bizarre happenings is attributable to Cardiff and Vale trust's leading role in the BBC's Doctor Who, starring Christopher Eccleston.

The infirmary and its sister hospital the University Hospital of Wales, appear in three episodes of the sci-fi show. A BBC Wales location scout approached the trust for help - and now the thousands of pounds it received will pay for a new garden at a local psychiatric hospital.

For trust director of development Stephen Harries, helping was a dream come true. 'I am a huge Doctor Who fan,' he enthused. 'I'm so old I remember the first episode with William Hartnell — and of course I hid behind the settee.'

The story began last spring when the scout phoned Mr Harries with a list of shots that would need filming. Two stories required hospitals and one an underground basement. Cardiff and Vale were able to help with them all.

In episode one, when the Doctor's sidekick Rose Tyler, played by Billie Piper, is attacked by shop dummies in the basement of a London department store, what the

Viewers actually saw were the service tunnels under the University Hospital of Wales. Around 30ft of the widest service tunnel was closed and filming took place over two nights last July to minimise disruption to the hospital. In the end, the footage lasted only two minutes.

'We tried to keep it as secret as we could but it was hard when we had lorryloads of shop dummies being delivered,' Mr Harries said.

Next, filming moved to Cardiff Royal Infirmary for an episode in which an alien spaceship crash-lands into the Thames. A body is retrieved from the wreckage and whisked to 'Albion Hospital', supposedly in London.

The Doctor arrives in his Tardis and runs down the corridor at Cardiff Royal Infirmary after the pig-like creature. Mr Harries said: 'When we saw the Tardis that's when we knew this was something very significant'

The infirmary will appear in a further episode, set in the Second World War, to be shown later this month.