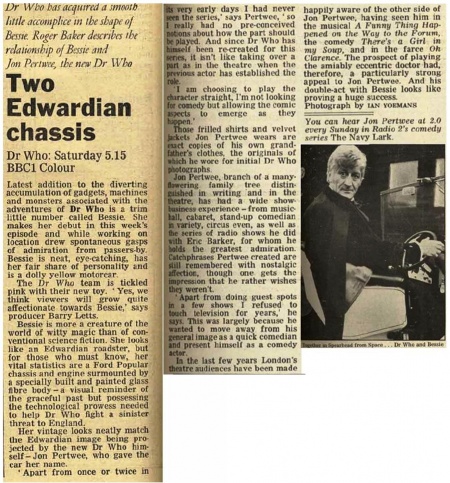 Dr Who has acquired a smooth little accomplice in the shape of Bessie. Roger Baker describes the relationship of Bessie and Jon Pertwee, the new Dr Who

Latest addition to the diverting accumulation of gadgets, machines and monsters associated with the adventures of Dr Who is a trim little number called Bessie. She makes her debut in this week's episode and while working on location drew spontaneous gasps of admiration from passers-by. Bessie is neat, eye-catching, has her fair share of personality and is a dolly yellow motorcar.

The Dr Who team is tickled pink with their new toy. 'Yes, we think viewers will grow quite affectionate towards Bessie,' says producer Barry Letts.

Bessie is more a creature of the world of witty magic than of conventional science fiction. She looks like an Edwardian roadster, but for those who must know, her vital statistics are a Ford Popular chassis and engine surmounted by a specially built and painted glass fibre body - a visual reminder of the graceful past but possessing the technological prowess needed to help Dr Who fight a sinister threat to England.

Her vintage looks neatly match the Edwardian image being projected by the new Dr Who himself - Jon Pertwee, who gave the car her name.

'Apart from once or twice in its very early days I had never seen the series,' says Pertwee, 'so I really had no pre-conceived notions about how the part should be played. And since Dr Who has himself been re-created for this series, it isn't like taking over a part as in the theatre when the previous actor has established the role.

'I am choosing to play the character straight, I'm not looking for comedy but allowing the comic aspects to emerge as they happen.'

Those frilled shirts and velvet jackets Jon Pertwee wears are exact copies of his own grandfather's clothes, the originals of which he wore for initial Dr Who photographs.

Jon Pertwee, branch of a many-flowering family tree distinguished in writing and in the theatre, has had a wide show-business experience - from music-hall, cabaret, stand-up comedian in variety, circus even, as well as the series of radio shows he did with Eric Barker, for whom he holds the greatest admiration. Catchphrases Pertwee created are still remembered with nostalgic affection, though one gets the impression that he rather wishes they weren't.

'Apart from doing guest spots in a few shows I refused to touch television for years,' he says. This was largely because he wanted to move away from his general image as a quick comedian and present himself as a comedy actor.

In the last few years London's theatre audiences have been made happily aware of the other side of Jon Pertwee, having seen him in the musical A Funny Thing Happened on the Way to the Forum, the comedy There's a Girl in my Soup, and in the farce Oh Clarence. The prospect of playing the amiably eccentric doctor had, therefore, a particularly strong appeal to Jon Pertwee. And his double-act with Bessie looks like proving a huge success.

You can hear Jon Pertwee at 2.0 every Sunday in Radio 2's comedy series The Navy Lark.

Caption: Together in Spearhead from Space ... Dr Who and Bessie