U.K.'s 'Doctor Who' Coming to America 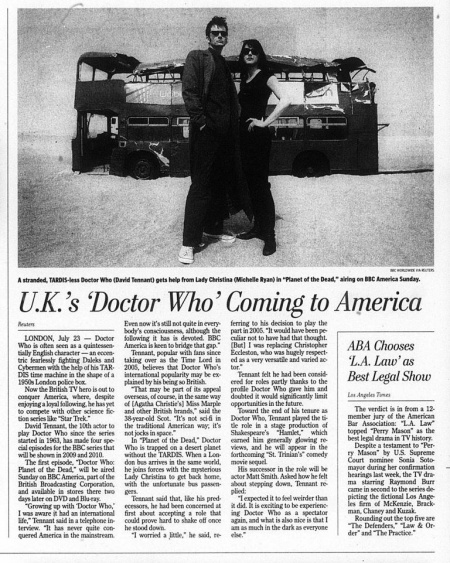 Doctor Who is often seen as a quintessentially English character -- an eccentric fearlessly fighting Daleks and Cybermen with the help of his TARDIS time machine in the shape of a 1950s London police box.

Now the British TV hero is out to conquer America, where, despite enjoying a loyal following, he has yet to compete with other science fiction series like "Star Trek."

David Tennant, the 10th actor to play Doctor Who since the series started in 1963, has made four special episodes for the BBC series that will be shown in 2009 and 2010.

The first episode, "Doctor Who: Planet of the Dead," will be aired Sunday on BBC America, part of the British Broadcasting Corporation, and available in stores there two days later on DVD and Blu-ray.

"Growing up with 'Doctor Who,' I was aware it had an international life," Tennant said in a telephone interview. "It has never quite conquered America in the mainstream. Even now it's still not quite in everybody's consciousness, although the following it has is devoted. BBC America is keen to bridge that gap."

Tennant, popular with fans since taking over as the Time Lord in 2005, believes that Doctor Who's international popularity may be explained by his being so British.

"That may be part of its appeal overseas, of course, in the same way of [Agatha Christie's] Miss Marple and other British brands," said the 38-year-old Scot. "It's not sci-fi in the traditional American way; it's not jocks in space."

In "Planet of the Dead," Doctor Who is trapped on a desert planet without the TARDIS. When a London bus arrives in the same world, he joins forces with the mysterious Lady Christina to get back home, with the unfortunate bus passengers.

Tennant said that, like his predecessors, he had been concerned at first about accepting a role that could prove hard to shake off once he stood down.

"I worried a little," he said, referring to his decision to play the part in 2005. "It would have been peculiar not to have had that thought. [But] I was replacing Christopher Eccleston, who was hugely respected as a very versatile and varied actor."

Tennant felt he had been considered for roles partly thanks to the profile Doctor Who gave him and doubted it would significantly limit opportunities in the future.

Toward the end of his tenure as Doctor Who, Tennant played the title role in a stage production of Shakespeare's "Hamlet," which earned him generally glowing reviews, and he will appear in the forthcoming "St. Trinian's" comedy movie sequel.

His successor in the role will be actor Matt Smith. Asked how he felt about stepping down, Tennant replied:

"I expected it to feel weirder than it did. It is exciting to be experiencing Doctor Who as a spectator again, and what is also nice is that I am as much in the dark as everyone else."

GRAPHIC: IMAGE; BBC Worldwide Via Reuters; A stranded, TARDIS-less Doctor Who (David Tennant) gets help from Lady Christina (Michelle Ryan) in "Planet of the Dead," airing on BBC America Sunday.