U.S. Invaded By Doctor Who 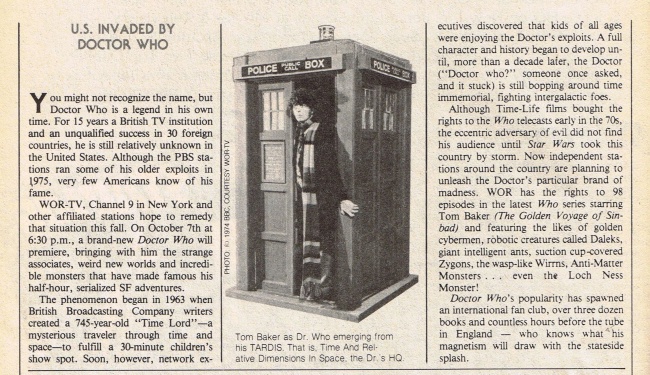 You might not recognize the name, but Doctor Who is a legend in his own time. For 15 years a British TV institution and an unqualified success in 30 foreign countries, he is still relatively unknown in the United States. Although the PBS stations ran some of his older exploits in 1975, very few Americans know of his fame.

WOR-TV, Channel 9 in New York and other affiliated stations hope to remedy that situation this fall. On October 7th at 6:30 p.m., a brand-new Doctor Who will premiere, bringing with him the strange associates, weird new worlds and incredible monsters that have made famous his half -hour, serialized SF adventures.

The phenomenon began in 1963 when British Broadcasting Company writers created a 745-year-old "Time Lord" — a mysterious traveler through time and space — to fulfill a 30-minute children's show spot. Soon, however, network executives discovered that kids of all ages were enjoying the Doctor's exploits. A full character and history vgan to develop until, more than a decade later, the Doctor ("Doctor who?" someone once asked, and it stuck) is still bopping around time immemorial, fighting intergalactic foes.

Although Time-Life films bought the rights to the Who telecasu early in the 70s, the eccentric adversary of evil did not fmd his audience until Star Wars took this country by storm. Now independent stations around the country are planning to unleash the Doctor's particular brand of madness. WOR has the rights to 98 episodes in the latest Who series starring Tom Baker (The Golden Voyage of Sinbad) and featuring the likes of golden cybermen, robotic creatures called Daleks, giant intelligent ants, suaion cup-covered Zygons, the wasp-Uke Wirms, Anti-Matter Monsters ... even the Loch Ness Monster!

Doctor Who's popularity has spawned an international fan club, over three dozen books and countless hours before the tube in England — who knows what his magnetism will draw with the stateside splash.

Caption: Tom Baker as Dr. Who emerging from his TARDIS. That is, Time And Relative Dimensions In Space, the Dr.'s HQ.