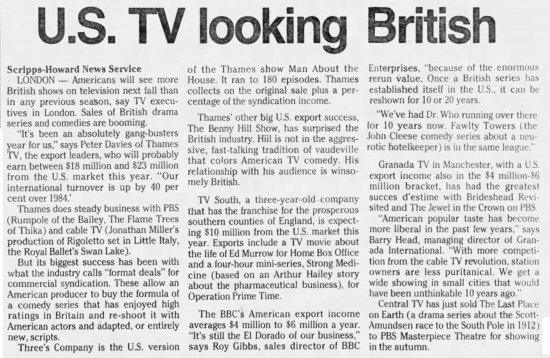 LONDON — Americans will see more British shows on television next fall than in any previous season, say TV executives in London. Sales of British drama series and comedies are booming.

"It's been an absolutely gang-busters year for us," says Peter Davies of Thames TV, the export leaders, who will probably earn between $18 million and $23 million from the U.S. market this year. "Our international turnover is up by 40 per cent over 1984.'

Thames does steady business with PBS (Rumpole of the Bailey, The Flame Trees of Thika) and cable TV (Jonathan Miller's production of Rigoletto set in Little Italy, the Royal Ballet's Swan Lake).

But its biggest success has been with what the industry calls "format deals" for commercial syndication. These allow an American producer to buy the formula of a comedy series that has enjoyed high ratings in Britain and re-shoot it with American actors and adapted, or entirely new, scripts.

Three's Company is the U.S. version of the Thames show Man About the House. It ran to 180 episodes. Thames collects on the original sale plus a percentage of the syndication income.

Thames' other big U.S. export success, The Benny Hill Show, has surprised the British industry. Hill is not in the aggressive, fast-talking tradition of vaudeville that colors American TV comedy. His relationship with his audience is winsomely British.

TV South, a three-year-old company that has the franchise for the prosperous southern counties of England, is expecting $10 million from the U.S. market this year. Exports include a TV movie about the life of Ed Murrow for Home Box Office and a four-hour mini-series, Strong Medicine (based on an Arthur Hailey story about the pharmaceutical business), for Operation Prime Time.

The BBC's American export income averages $4 million to $6 million a year. "It's still the El Dorado of our business," says Roy Gibbs, sales director of BBC Enterprises, "because of the enormous rerun value. Once a British series has established itself in the U.S., it can be reshown for 10 or 20 years.

"We've had Dr. Who running over there for 10 years now. Fawlty Towers (the John Cleese comedy series about a neurotic hotelkeeper) is in the same league."

Granada TV in Manchester, with a U.S. export income also in the $4 million-$6 million bracket, has had the greatest succes d'estime with Brideshead Revisited and The Jewel in the Crown on PBS.

"American popular taste has become more liberal in the past few years," says Barry Head, managing director of Granada International. "With more competition from the cable TV revolution, station owners are less puritanical. We get a wide showing in small cities that would have been unthinkable 10 years ago."

Central TV has just sold The Last Place on Earth (a drama series about the Scott-Amundsen race to the South Pole in 1912) to PBS Masterpiece Theatre for showing in the autumn.