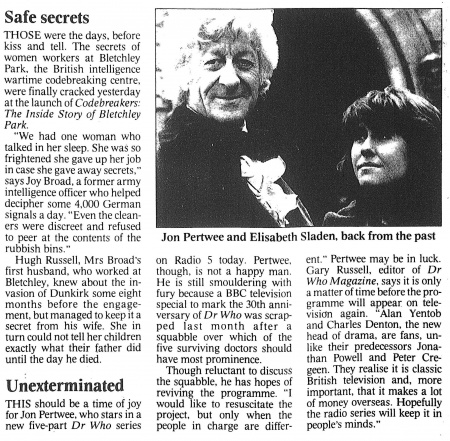 This should be a time of joy for Jon Pertwee, who stars in a new five-part Dr Who series on Radio 5 today. Pertwee, though, is not a happy man. He is still smouldering with fury because a BBC television special to mark the 30th anniversary of Dr Who was scrapped last month after a squabble over which of the five surviving doctors should have most prominence.

Though reluctant to discuss the squabble, he has hopes of reviving the programme. "I would like to resuscitate the project, but only when the people in charge are different." Pertwee may be in luck. Gary Russell, editor of Dr Who Magazine, says it is only a matter of time before the programme will appear on television again. "Alan Yentob and Charles Denton, the new head of drama, are fans, unlike their predecessors Jonathan Powell and Peter Cregeen. They realise it is classic British television and, more important, that it makes a lot of money overseas. Hopefully the radio series will keep it in people's minds."

Caption: Jon Pertwee and Elisabeth Sladen, back from the past