Unknown galaxies open up for Dunoon's Dr Who! 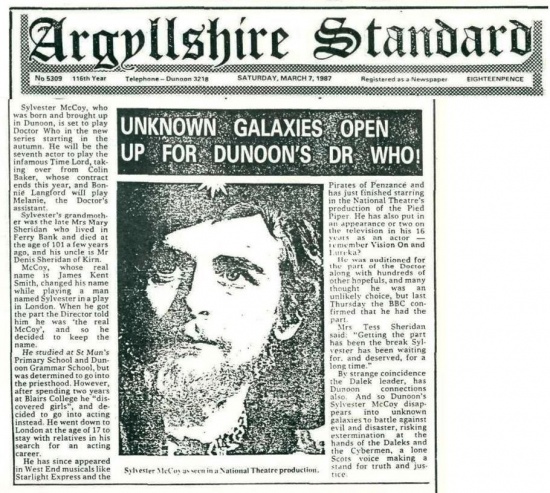 Sylvester McCoy, who was born and brought up in Dunoon, is set to play Doctor Who in the new series starting in the autumn. He will be the seventh actor to play the infamous Time Lord, taking over from Colin Baker, whose contract ends this year, and Bonnie Langford will play Melanie, the Doctor's assistant.

Sylvester's grandmother was the late Mrs Mary Sheridan who lived in Ferry Bank and died at the age of 101 a few years ago, and his uncle is Mr Denis Sheridan of Kira.

McCoy, whose real name is James Kent Smith, changed his name while playing a man named Sylvester in a play in London. When he got the part the director told him he was 'the real McCoy', and so he decided to keep the name.

He studied at St Mutes Primary School and Dunoon Grammar School, but was determined to go into the priesthood. However, after spending two years at Blairs College he "discovered girls", and decided to go into acting instead. He went down to London at the age of 17 to stay with relatives in his search for an acting career.

He has since appeared in West End musicals like Starlight Express and the Pirates of Penzance and has just finished starring in the National Theatres production of the Pied Piper He has also put in an appearance or two on the television in his 16 years as an actor member Vision On and Eureka?

He was auditioned for the part of the Doctor along with hundreds of other hopefuls, and many thought he was an unlikely choice, but last Thursday the BBC confirmed that he had the part.

Mrs Tess Sheridan said: "Getting the part has been the break Sylvester has been waiting for, and deserved, for a long time."

By strange coincidence the Dalek leader, has Dunoon connections also. And so Dunoon's Sylvester McCoy disappears into unknown galaxies to battle against exit and disaster, risking extermination at the hands of the Daleks and the Cybermen, a lone Scots voice making a stand for truth and justice.

Caption: Sylvester McCoy, as seen in a National Theatre production.