Violence is not really Dr Who's cup of tea 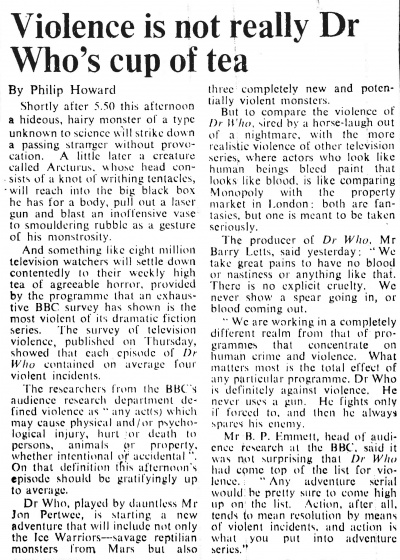 Shortly after 5.50 this afternoon a hideous, hairy monster of a type unknown to science will strike down a passing stranger without provocation. A little later a creature called Arcturus, whose head consists of a knot of writhing tentacles, will reach into the big black box he has for a body, pull out a laser gun and blast an inoffensive vase to smouldering rubble as a gesture of his monstrosity.

And something like eight million television watchers will settle down contentedly to their weekly high tea of agreeable horror, provided by the programme that an exhaustive BBC survey has shown is the most violent of its dramatic fiction series. The survey of television violence, published on Thursday, showed that each episode of Dr Who contained on average four violent incidents.

The researchers from the BBC's audience research department defined violence as "any act(s) which, may cause physical and/or psychological injury, hurt or death to persons, animals or property, whether intentional or accidental". On that definition this afternoon's episode should be gratifyingly up to average.

Dr Who, played by dauntless Mr Jon Pertwee, is starting a new adventure that will include not only the Ice Warriors—savage reptilian monsters from Mars but also three completely new and potentially violent monsters.

But to compare the violence of Dr Who, sired by a horse-laugh out of a nightmare, with the more realistic violence of other television series, where actors who look like human beings bleed paint that looks like blood, is like comparing Monopoly with the property market in London : both arc fantasies, but one is meant to be taken seriously.

The producer of Dr Who, Mr Barry Letts, said yesterday: " We take great pains to have no blood or nastiness or anything like that. There is no explicit cruelty. We never show a spear going in, or blood coming out.

"We are working in a completely different realm from that of programmes that concentrate on human crime and violence. What matters most is the total effect of any particular programme. Dr Who is definitely against violence. He never uses a gun. He fights only if forced to, and then he always spares his enemy.

Mr B. P. Emmett, head of audience research at the BBC, said it was not surprising that Dr Who had come top of the list for violence. "Any adventure serial would he pretty sure to come high up on the list. Action, after, all, tends to mean resolution by means of violent incidents, and action is what you put into adventure series."