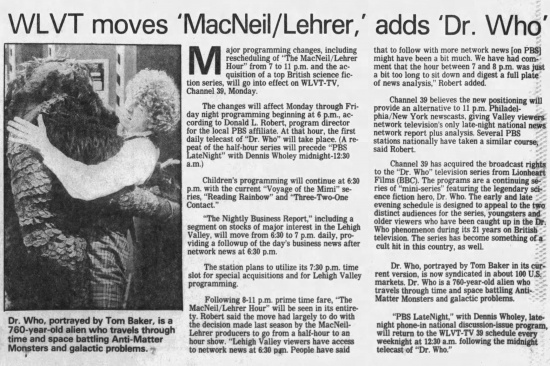 Dr. Who, portrayed by Tom Baker, is a 760-year-old alien who travels through time and space battling Anti-Matter Monsters and galactic problems.

Major programming changes, including rescheduling of "The MacNeil/Lehrer Hour" from 7 to 11 p.m. and the acquisition of a top British science fiction series, will go into effect on WLVT-TV, Channel 39, Monday.

The changes will affect Monday through Friday night programming beginning at 6 p.m., according to Donald L. Robert, program director for the local PBS affiliate. At that hour, the first daily telecast of "Dr. Who" will take place. (A repeat of the half-hour series will precede "PBS LateNight" with Dennis Wholey midnight-12:30 a.m.)

Children's programming will continue at 6:30 p.m. with the current "Voyage of the Mimi" series. "Reading Rainbow" and "Three-Two-One Contact."

"The Nightly Business Report," including a segment on stocks of major interest in the Lehigh Valley, will move from 6:30 to 7 p.m. daily, providing a followup of the day's business news after network news at 6:30 p.m.

The station plans to utilize its 7:30 p.m. time slot for special acquisitions and for Lehigh Valley programming.

Following 8-11 p.m. prime time fare, "The MacNeil/Lehrer Hour" will be seen in its entirety. Robert said the move had largely to do with the decision made last season by the MacNeil-Lehrer producers to go from a half-hour to an hour show. "Lehigh Valley viewers have access to network news at 6:30 pm. People have said that to follow with more network news [on PBS] might have been a bit much. We have had comment that the hour between 7 and 8 p.m. was just a bit too long to sit down and digest a full plate of news analysis," Robert added.

Channel 39 has acquired the broadcast rights to the "Dr. Who" television series from Lionheart Films (BBC). The programs are a continuing series of "mini-series" featuring the legendary science fiction hero, Dr. Who. The early and late evening schedule is designed to appeal to the two distinct audiences for the series, youngsters and older viewers who have been caught up in the Dr. Who phenomenon during its 21 years on British television. The series has become something of a cult hit in this country, as well.

Dr. Who, portrayed by Tom Baker in its current version, is now syndicated in about 100 U.S. markets. Dr. Who is a 760-year-old alien who, travels through time and space battling Anti-Matter Monsters and galactic problems.

"PBS LateNight," with Dennis Wholey, late-night phone-in national discussion-issue program, will return to the WLVT-TV 39 schedule every weeknight at 12:30 a.m. following the midnight telecast of "Dr. Who."