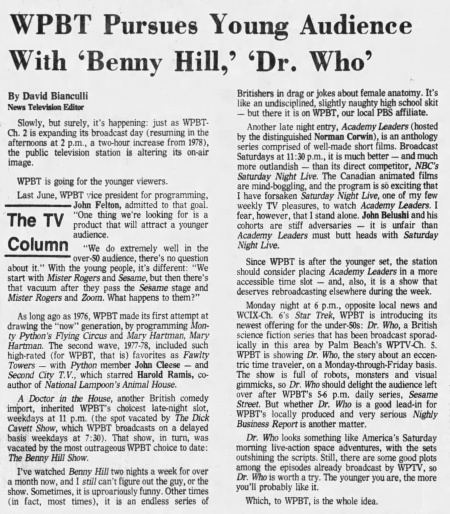 Slowly, but surely, it's happening: just as WPBT-Ch. 2 is expanding its broadcast day (resuming in the afternoons at 2 p.m., a two-hour increase from 1978), the public television station is altering its on-air image.

WPBT is going for the younger viewers.

Last June, WPBT vice president for programming, John Felton, admitted to that goal. "One thing we're looking for is a product that will attract a younger audience.

"We do extremely well in the over-50 audience, there's no question about it." With the young people, it's different: "We start with Mister Rogers and Sesame, but then there's that vacuum after they pass the Sesame stage and Mister Rogers and Zoom. What happens to them?"

As long ago as 1976, WPBT made its first attempt at drawing the "now" generation, by programming Monty Python's Flying Circus and Mary Hartman, Mary Hartman. The second wave, 1977-78, included such high-rated (for WPBT, that is) favorites as Fawlty Towers — with Python member John Cleese — and Second City T.V., which starred Harold Ramis, coauthor of National Lampoon's Animal House.

A Doctor in the House, another British comedy import, inherited WPBT's choicest late-night slot, weekdays at 11 p.m. (the spot vacated by The Dick Cavett Show, which WPBT broadcasts on a delayed basis weekdays at 7:30). That show, in turn, was vacated by the most outrageous WPBT choice to date: The Benny Hill Show.

I've watched Benny Hill two nights a week for over a month now, and I still can't figure out the guy, or the show. Sometimes, it is uproariously funny. Other times (in fact, most times), it is an endless series of Britishers in drag or jokes about female anatomy. It's like an undisciplined, slightly naughty high school skit — but there it is on WPBT, our local PBS affiliate.

Another late night entry, Academy Leaders (hosted by the distinguished Norman Corwin), is an anthology series comprised of well-made short films. Broadcast Saturdays at 11:30 p.m., it is much better — and much more outlandish — than its direct competitor, NBC Saturday Night Live. The Canadian animated film sare mind-boggling, and the program is so exciting that I have forsaken Saturday Night Live, one of my few weekly TV pleasures, to watch Academy Leaders. I fear, however, that I stand alone. John Belushi and his cohorts are stiff adversaries — it is unfair than Academy Leaders must butt heads with Saturday Night Live.

Since WPBT is after the younger set, the statiot should consider placing Academy Leaders in a more accessible time slot — and, also, it is a show that deserves rebroadcasting elsewhere during the week.

Monday night at 6 p.m., opposite local news an, WCIX-Ch. 6's Star Trek, WPBT is introducing its newest offering for the under-50s: Dr. Who, a British science fiction series that has been broadcast sporadically in this area by Palm Beach's WPTV-Ch. 5. WPBT is showing Dr. Who, the story about an eccentric time traveler, on a Monday-through-Friday basis The show is full of robots, monsters and visual gimmicks, so Dr. Who should delight the audience left over after WPBT's 5-6 p.m. daily series, Sesame Street. But whether Dr. Who is a good lead-in for WPBT's locally produced and very serious Nightly Business Report is another matter.

Dr. Who looks something like America's Saturday morning live-action space adventures, with the sets outshining the scripts. Still, there are some good plots among the episodes already broadcast by WPTV, so Dr. Who is worth a try. The younger you are, the more you'll probably like it.

Which, to WPBT, is the whole idea.