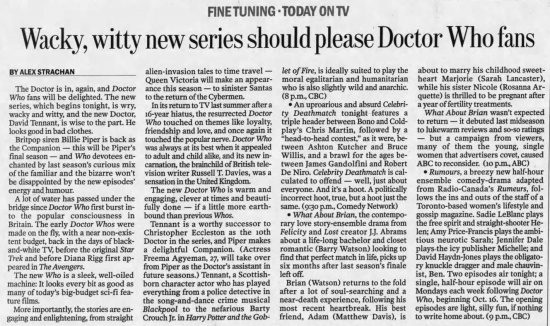 The Doctor is in, again, and Doctor Who fans will be delighted. The new series, which begins tonight, is wry, wacky and witty, and the new Doctor, David Tennant, is wise to the part. He looks good in bad clothes.

Britpop siren Billie Piper is back as the Companion — this will be Piper's final season — and Who devotees enchanted by last season's curious mix of the familiar and the bizarre won't be disappointed by the new episodes' energy and humour.

A lot of water has passed under the bridge since Doctor Who first burst into the popular consciousness in Britain. The early Doctor Whos were made on the fly, with a near non-existent budget, back in the days of black-and-white TV, before the original Star Trek and before Diana Rigg first appeared in The Avengers.

The new Who is a sleek, well-oiled machine: It looks every bit as good as many of today's big-budget sci-fi feature films.

More importantly, the stories are engaging and enlightening, from straight alien-invasion tales to time travel — Queen Victoria will make an appearance this season — to sinister Santas to the return of the Cybermen.

In its return to TV last summer after a 16-year hiatus, the resurrected Doctor Who touched on themes like loyalty, friendship and love, and once again it touched the popular nerve. Doctor Who was always at its best when it appealed to adult and child alike, and its new incarnation, the brainchild of British television writer Russell T. Davies, was a sensation in the United Kingdom.

The new Doctor Who is warm and engaging, clever at times and beautifully done — if a little more earthbound than previous Whos.

Tennant is a worthy successor to Christopher Eccleston as the 10th Doctor in the series, and Piper makes a delightful Companion. (Actress Freema Agyeman, 27, will take over from Piper as the Doctor's assistant in future seasons.) Tennant, a Scottish-born character actor who has played everything from a police detective in the song-and-dance crime musical Blackpool to the nefarious Barty Crouch Jr. in Harry Potter and the Goblet of Fire, is ideally suited to play the moral egalitarian and humanitarian who is also slightly wild and anarchic. (8 p.m., CBC)