Walsh set to be Doctor Who Jodie's sidekick 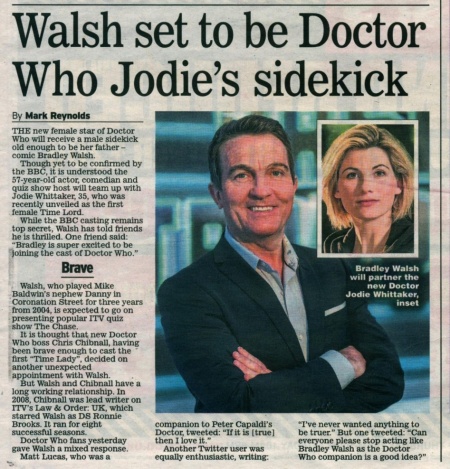 THE new female star of Doctor Who will receive a male sidekick old enough to be her father comic Bradley Walsh.

Though yet to be confirmed by the BBC, it is understood the 57-year-old actor, comedian and quiz show host will team up with Jodie Whittaker, 35, who was recently unveiled as the first female Time Lord.

While the BBC casting remains top secret, Walsh has told friends he is thrilled. One friend said: "Bradley is super excited to be joining the cast of Doctor Who."

Walsh, who played Mike Baldwin's nephew Danny in Coronation Street for three years from 2004, is expected to go on presenting popular ITV quiz show The Chase.

It is thought that new Doctor Who boss Chris Chibnall, having been brave enough to cast the first "Time Lady", decided on another unexpected appointment with Walsh.

But Walsh and Chibnall have a long working relationship. In 2008, Chibnall was lead writer on ITV's Law & Order: UK, which starred Walsh as DS Ronnie Brooks. It ran for eight successful seasons.

Doctor Who fans yesterday gave Walsh a mixed response. Matt Lucas, who was a companion to Peter Capaldi's Doctor, tweeted: "If it is [true] then I love it."

Another Twitter user was equally enthusiastic, writing: "I've never wanted anything to be truer." But one tweeted: "Can everyone please stop acting like Bradley Walsh as the Doctor Who companion is a good idea?"