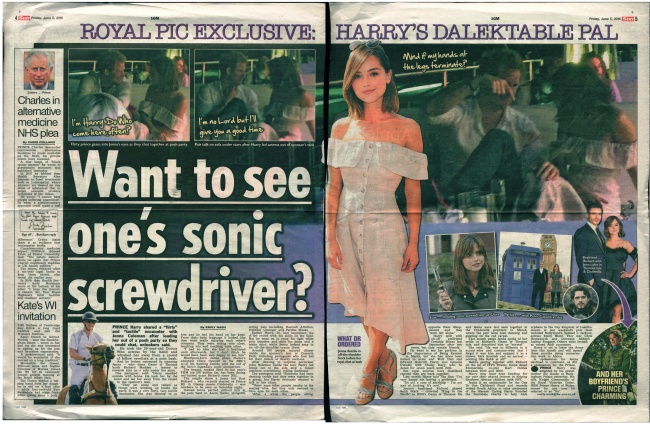 PRINCE Harry shared a "flirty" and "tactile" encounter with Jenna Coleman after leading her out of a posh party so they could chat, onlookers said.

He took the 29-year-old Doctor Who actress by the hand and whisked her away from a crowd of fellow revellers at a polo bash. And he looked entranced as stunning Jenna — who dates Game of Thrones hunk Richard Madden — leaned in towards him on a sofa under the stars. One partygoer said: "Harry sneaked outside with Jenna. He took her by the hand and led her away from the crowd in the sponsor's tent.

"They sat alone and talked as things were winding up inside the party. It was a very flirty, very tactile encounter. She was leaning in to him and he had his hand on her knee. From their body language it looked like they were really enjoying each other's company. They were sitting very close, laughing lots and touching each other.

"I had no idea she had a boyfriend until afterwards, but I don't think he would have been very happy to see this."

The couple share a home but Scot Richard — who recently starred as Prince Kit in Disney movie Cinderella — was nowhere to be seen on Saturday night.

Instead Jenna partied without him at the polo bash in Ascot, Berks, alongside acting pals including Hannah Arterton, Holliday Grainger and Perdita Weeks.

Earlier Harry, 30, had impressed the A-list crowd with his skills on the field. But he went on to swap his tight white polo trousers and shirt for jeans and a white shirt, while Jenna looked sexy in an off-the-shoulder cream dress.

Around 250 people enjoyed dinner inside the sponsor's tent at Coworth Park, including partygoers who had bid for their tickets at charity auctions.

After dancing to surprise performer John Newman inside the tent, Harry led Jenna out to the sofa atop a raised platform overlooking rolling parkland.

The partygoer said: "Everyone had been dancing inside and they were together in a group, but Harry obviously wanted to talk to her alone.

"There were other people nearby in the seating area, but they only seemed to have eyes for each other.

"After a while the people sitting opposite them disappeared and they were left alone."

Harry split with on-off girlfriend Cressida Bonas last September after two years, but they remain friends. He went to see her perform in the Importance of Being Earnest in March, but she has since been linked to actor and Wolf Hall star Edward Holcroft. Harry also remains friendly with Chelsy Davy, who he dated for seven years until 2010.

But royal sources have dismissed reports they are back together.

Last month Harry told The Sun: "I'm very happy not having a girlfriend.

Jenna's boyfriend Richard played Robb Stark — crowned "King in the North" in HBO's Game of Thrones. He and Jenna were last seen together at the Cinderella premiere in March, where the pair were seen dancing and giggling on the red carpet.

Last month petite Jenna spoke of her pride at Richard's Game of Thrones role, and described him as "normal".

She said: "He was so different in it accent-wise and costume-wise that I forgot it was him and enjoyed it as a viewer. He's Scottish and so normal — nothing like Robb at all!"

Before getting together with Richard on the set of ITV's Titanic, Jenna dated Emmerdale co-star Karl Davies between 2006 and 2009.

Harry may have been bending her ear over their shared interest in helping Southern African children with HIV.

Jenna is an ambassador for the One To One Children's Fund and recently visited South Africa to raise awareness of the disease. Caring Harry founded the Sentebale charity to help Aids orphans in the tiny kingdom of Lesotho. Guests at last weekend's polo bash included Hollywood's Samuel L Jackson, actress Emily Blunt, Thor star Chris Hemsworth and Downton Abbey's Joanne Froggatt. Others were invited as valued Audi customers.

Harry is set to leave the Army later this month and will spend three months doing conservation work in Africa.

PRINCE Harry was knighted by his grandmother the Queen at Buckingham Palace yesterday. His title, Knight Commander of the Royal Victorian Order, HRH Prince Henry of Wales, means he can now be referred to as "Sir".

I'm no Lord but I'll give you a good time

What Dr Ordered: Jenna dazzles in off-the-shoulder frock before her royal chat at bash

Mind if my hands at the legs terminate?

Boyfriend ... Richard with Jenna, plus in Thrones role & Cinderella and her boyfriend's Prince Charming