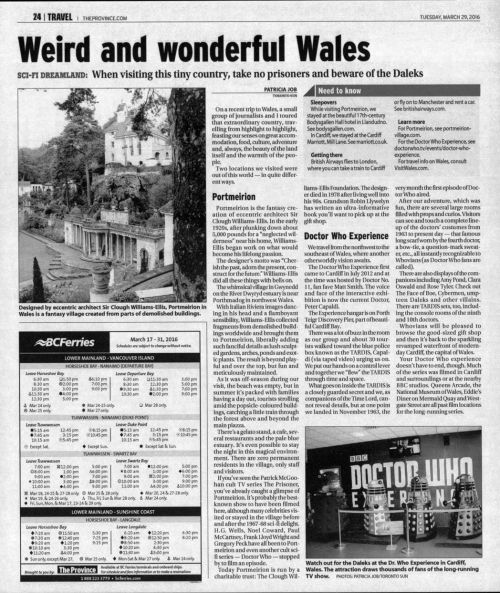 SCI-FI DREAMLAND: When visiting this tiny country, take no prisoners and beware of the Daleks

Designed by eccentric architect Sir Clough Williams-Ellis, Portmeirion in Wales is a fantasy village created from parts of demolished buildings.

On a recent trip to Wales, a small group of journalists and I toured that extraordinary country, travelling from highlight to highlight, feasting our senses on great accommodation, food, culture, adventure and, always, the beauty of the land itself and the warmth of the people.

Two locations we visited were out of this world — in quite different ways.

Portmeirion is the fantasy creation of eccentric architect Sir Clough Williams-Ellis. In the early 1920s, after plunking down about 5,000 pounds for a "neglected wilderness" near his home, Williams-Ellis began work on what would become his lifelong passion.

The designer's motto was "Cherish the past, adorn the present, construct for the future." Williams-Ellis did all these things with bells on.

The whimsical village in Gwynedd on the River Dwyryd estuary is near Porthmadog in northwest Wales.

With Italian Riviera images dancing in his head and a flamboyant sensibility, Williams-Ellis collected fragments from demolished buildings worldwide and brought them to Portmeirion, liberally adding such fanciful details as lush sculpted gardens, arches, ponds and exotic plants. The result is beyond playful and over the top, but fun and meticulously maintained.

As it was off-season during our visit, the beach was empty, but in summer it's packed with families having a day out, tourists strolling amid the popsicle-coloured buildings, catching a little train through the forest above and beyond the main piazza.

There's a gelato stand, a cafe, several restaurants and the pale blue estuary. It's even possible to stay the night in this magical environment. There are zero permanent residents in the village, only staff and visitors.

If you've seen the Patrick McGoohan cult TV series The Prisoner, you've already caught a glimpse of Portmeirion. It's probably the best-known show to have been filmed here, although many celebrities visited or stayed in the village before and after the 1967-68 sci-fi delight.

H.G. Wells, Noel Coward, Paul McCartney, Frank Lloyd Wright and Gregory Peck have all been to Portmeirion and even another cult sci-fi series — Doctor Who — stopped by to film an episode.

Today Portmeirion is run by a charitable trust: The Clough Williams-Ellis Foundation. The designer died in 1978 after living well into his 90s. Grandson Robin Llywelyn has written an ultra-informative book you'll want to pick up at the gift shop.

We travel from the northwest to the southeast of Wales, where another otherworldly vision awaits.

The Doctor Who Experience first came to Cardiff in July 2012 and at the time was hosted by Doctor No. 11, fan fave Matt Smith. The voice and face of the interactive exhibition is now the current Doctor, Peter Capaldi.

There was a lot of buzz in the room as our group and about 30 tourists walked toward the blue police box known as the TARDIS, Capaldi (via taped video) urging us on. We put our hands on a control lever and together we "flew" the TARDIS through time and space.

What goes on inside the TARDIS is a closely guarded secret and we, as companions of the Time Lord, cannot reveal details, but at one point we landed in November 1963, the very month the first episode of Doctor Who aired.

After our adventure, which was fun, there are several large rooms filled with props and curios. Visitors can see and touch a complete lineup of the doctors' costumes from 1963 to present day — that famous long scarf worm by the fourth doctor a bow-tie, a question-mark sweater etc., all instantly recognizable to Whovians (as Doctor Who fans are called).

There are also displays of the companions including Amy Pond, Clara Oswald and Rose Tyler Check out The Face of Boe, Cybermen, umpteen Daleks and other villains. There are TARDIS sets, too, including the console rooms of the ninth and 10th doctors.

Whovians will be pleased to browse the good-sized gift shop and then it's back to the sparkling revamped waterfront of modern-day Cardiff, the capital of Wales.

Your Doctor Who experience doesn't have to end, though. Much of the series was filmed in Cardiff and surroundings or at the nearby BBC studios. Queens Arcade, the National Museum of Wales, Eddie's Diner on Mermaid Quay and Westgate Street are all past film locations for the long-running series.

Watch out for the Daleks at the Dr. Who Experience in Cardiff, Wales. The attraction draws thousands of fans of the long-running TV show.