Well, look Who it is! 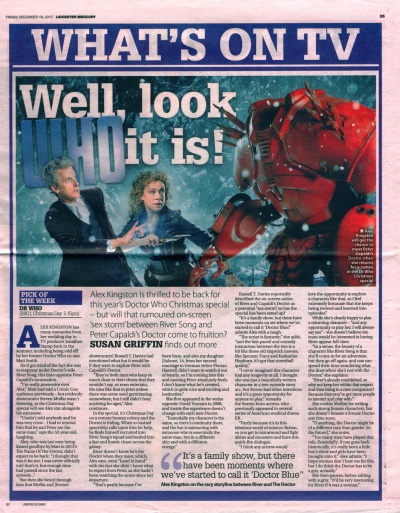 Alex Kingston is thrilled to be back for this year's Doctor Who Christmas special - but will that rumoured on-screen 'sex storm' between River Song and Peter Capaldi's Doctor come to fruition? SUSAN GRIFFIN finds out more

ALEX KINGSTON has many memories from her wedding day to TV producer Jonathan Stamp back in the summer, including being told off by her former Doctor Who co-star Matt Smith.

He'd got wind of the fact she was to reappear as the Doctor's wife River Song, this time opposite Peter Capaldi's incarnation.

"I hadn't told anybody and he was very cross - I had to remind him that he and Peter are the same man," says the 52-year-old, laughing.

Alex, who was last seen being kissed goodbye by Man in 2013's The Name Of The Doctor, didn't expect to be back: "I thought that was it for me. I was never officially told that's it, but enough time had passed since the last episode..."

But then she heard through fans that Moffat and [former

showrunner] Russell T. Davies had mentioned what fun it would be if they were to explore River with Capaldi's Doctor.

"They're both men who keep so much close to their chests that they wouldn't say, or even entertain, the idea like that in print unless there was some seed germinating somewhere, but I still didn't hear anything for ages," Alex continues.

In the special, it's Christmas Day on a remote human colony and the Doctor is hiding. When a crashed spaceship calls upon him for help, he finds himself recruited into River Song's squad and hurled into a fast and frantic chase across the galaxy.

River doesn't know he's the Doctor when they meet, which, Alex says, went "hand in hand" with the fact she didn't know what to expect from Peter, as she hadn't been watching the series since her departure.

"That's partly because I've been busy, and also my daughter [Salome, 14, from her second marriage to German writer Florian Haertel] didn't want to watch it out of loyalty, so I'm coming into this and meeting Peter absolutely fresh. I don't know what he's created, which is quite nice and exciting and instinctive!'

She first appeared in the series opposite David Tennant in 2008, and insists the experience doesn't change with each new Doctor.

"Essentially my character is the same, so there's continuity there, and the fun is interacting with someone who is essentially the same man, but in a different skin and with a different energy."

Russell T. Davies reportedly described the on-screen union of River and Capaldi's Doctor as a potential "sex storm',' so has the special has been sexed up?

"It's a family show, but there have been moments on set where we've started to call it 'Doctor Bluer' admits Alex with a laugh.

"The script is fantastic," she adds, "and the fast-paced and comedy interaction between the two is a bit like those old slapstick movies, like Spencer Tracy and Katharine Hepburn, it's got that screwball quality!'

"I never imagined this character had any longevity at all. I thought she was just a beautifully written character in a two-episode story arc, but Steven had other intentions and it's a great opportunity for anyone to play!" remarks the Surrey-born actress, who previously appeared in several series of American medical drama ER.

"Partly because it's in this fabulous world of science-fiction, so you get to run around and fight aliens and monsters and have this quick-fire dialogue.

"I think any actress would love the opportunity to explore a character like that, so I feel extremely fortunate that she keeps being revived and inserted into episodes!'

While she's clearly happy to play a returning character - "and any opportunity to play her, I will always say yes" - she doesn't believe the team would be interested in having River appear full-time.

"In a sense, the beauty of a character like River Song is that she'll come in for an adventure, but then go off again, and one can spend their time wondering what she does when she's not with the Doctor!" she explains.

"River's already established, so why not keep her within that respect and then bring in a new companion? Because then you've got more people to interact and play with."

She credits Moffatt for writing such strong female characters, but she doesn't foresee a female Doctor any time soon.

"If anything, the Doctor might be of a different race than gender [in the future]," she notes.

"Too many men have played that role. Essentially, if one goes back historically, it's really been a little boy's show and girls have been brought onto it," Alex admits. "I hope women don't hate me for this, but I do think the Doctor has to be a guy, actually!'

She then pauses, before adding with a grin: "It'd be very interesting for River if it was a woman!'

Caption: Alex Kingston will get the chance to meet Peter Capaldi's Doctor when she returns for a cameo in the Dr Who Christmas special