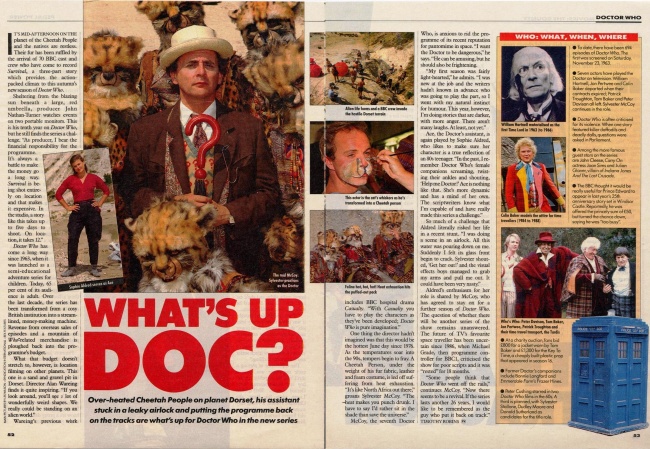 Over-heated Cheetah People on planet Dorset, his assistant stuck in a leaky airlock and putting the programme back on the tracks are what's up for Doctor Who in the new series

IT'S MID-AFTERNOON ON THE planet of the Cheetah People and the natives are restless. Their fur has been ruffled by the arrival of 70 BBC cast and crew who have come to record Survival, a three-part story which provides the action-packed climax to this autumn's new season of Doctor Who.

Sheltering from the blazing sun beneath a large, red umbrella, producer John Nathan-Turner watches events on two portable monitors. This is his tenth year on Doctor Who, but he still finds the series a challenge. "As producer, I bear the financial responsibility for the programme. It's always a battle to make the money go a long way. Survival is being shot entirely on location and that makes it expensive. In the studio, a story like this takes up to five days to shoot. On location, it takes 12."

Doctor Who has come a long way since 1963, when it was launched as a semi-educational adventure series for children. Today, 65 per cent of its audience is adult. Over the last decade, the series has been transformed from a cosy British institution into a streamlined, money-making machine. Revenue from overseas sales of episodes and a mountain of Who-related merchandise is ploughed back into the programme's budget.

What that budget doesn't stretch to, however, is location filming on other planets. This one is a sand and gravel pit in Dorset. Director Alan Wareing finds it quite inspiring. "If you p, look around, you'll see v lot of ". wonderfully weird shapes. We really could be standing on an z alien world."

Wareing's previous work includes BBC hospital drama Casualty. "With Casualty you have to play the characters as they've been developed; Doctor Who is pure imagination."

One thing the director hadn't imagined was that this would be the hottest June day since 1976. As the temperatures soar into the 90s, tempers begin to fray. A Cheetah Person, under the weight of his fur fabric, leather and foam costume, is led off suffering from heat exhaustion. "It's like North Africa out there;' groans Sylvester McCoy. "The —heat makes you punch drunk. I have to say I'd rather sit in the shade than save the universe"

McCoy, the seventh Doctor Who, is anxious to rid the programme of its recent reputation for pantomime in space. "I want the Doctor to be dangerous;' he says. "He can be amusing, but he should also be frightening.

"My first season was fairly light-hearted," he admits. "I was new at the job and the writers hadn't known in advance who was going to play the part, so I went with my natural instinct for humour. This year, however, I'm doing stories that are darker, with more anger. There aren't many laughs. At least, not yet."

Ace, the Doctor's assistant, is again played by Sophie Aldred, who likes to make sure her character is a true reflection of an 80s teenager. "In the past, I remember Doctor Who's female companions screaming, twisting their ankles and shouting, 'Help me Doctor!' Ace is nothing like that. She's more dynamic and has a mind of her own. The scriptwriters know what I'm capable of and have really made this series a challenge."

So much of a challenge that Aldred literally risked her life in a recent stunt. "I was doing a scene in an airlock. All this water was pouring down on me. Suddenly I felt its glass front begin to crack. Sylvester shouted, 'Get her out!' and the visual effects boys managed to grab my arms and pull me out. It could have been very nasty."

Aldred's enthusiasm for her role is shared by McCoy, who has agreed to stay on for a further season of Doctor Who. The question of whether there will be another series of the show remains unanswered. The future of TV's favourite space traveller has been uncertain since 1986, when Michael Grade, then programme controller for BBC1, criticised the show for poor scripts and it was "rested" for 18 months.

"Some people think that Doctor Who went off the rails," continues McCoy. "Now there seems to be a revival. If the series lasts another 26 years, I would like to be remembered as the guy who put it back on track."

• Doctor Who is often criticised for its violence. When one story featured killer daffodils and deadly dolls, questions were asked in Parliament.

• Among the more famous guest stars on the series are John Cleese, Carry On actress Joan Sims and Julian Glover, villain of Indiana Jones And The Lost Crusade.

• The BBC thought it would be really useful for Prince Edward to appear in last year's 25th anniversary story set in Windsor Castle. Reportedly, he was offered the princely sum of £50, but turned the chance down, saying he was "too busy".

• At a charity auction, fans bid £800 for a jacket worn by Tom Baker and £1,300 for the Key To Time, a cheaply built plastic prop that appeared in season 16.

• Peter Cushing starred in two Doctor Who films in the 60s. A third is plonned, with Sylvester Stallone, Dudley Moore and Donald Sutherland as candidates for the title role.

The real McCoy: Sylvester practises as the Doctor