What's a Panopticon? Ask a 'Who' Fan 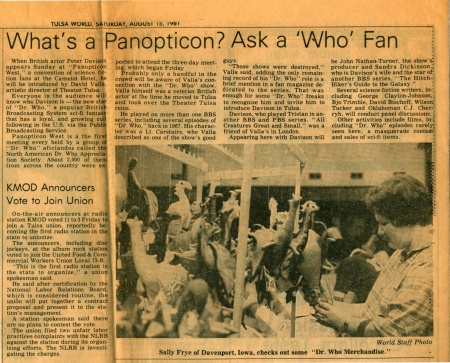 When British actor Peter Davison appears Sunday at "Panopticon West," a convention of science fiction fans at the Camelot Hotel, he will be introduced by David Valla, artistic director of Theater Tulsa.

Everyone in the audience will know who Davison is — the new star of "Dr. Who," a popular British Broadcasting System sci-fi fantasy that has a loyal, and growing cult following in the U.S. via the Public Broadcasting Service.

Panopticon West is a the first meeting every held by a group of "Dr. Who" aficiandos called the North American Dr. Who Appreciation Society. About 2,000 of them from across the country were expected to attend the three-day meeting, which began Friday.

Probably only a handful in the crowd will be aware of Valla's connection with the "Dr. Who" show. Valla himself was a veteran British actor at the time he moved to Tulsa and took over the Theater Tulsa reins.

He played on more than one BBS series, including several episodes of "Dr. Who," back in 1967. His character was a Lt. Carstairs, who Valla described as one of the show's good guys.

"Those shows were destroyed," Valla said, adding the only remaining record of his "Dr. Who" role is a brief mention in a fan magazine dedicated to the series. That was enough for some "Dr. Who" freaks to recognize him and invite him to introduce Davison in Tulsa.

Davison, who played Tristan in another BBS and PBS series, "All Creatures Great and Small," was a friend of Valla's in London.

Appearing here with Davison will be John Nathan-Turner, the show's: producer and Sandra Dickinson, who is Davison's wife and the star of another BBS series, "The Hitch-Hiker's Guide to the Galaxy."

Other activities include films, in eluding "Dr. Who" episodes rarely: seen here; a masquerade contest, and sales of sci-fi items.

Caption: Sally Frye of Davenport, Iowa, checks out some "Dr. Who Merchandise.