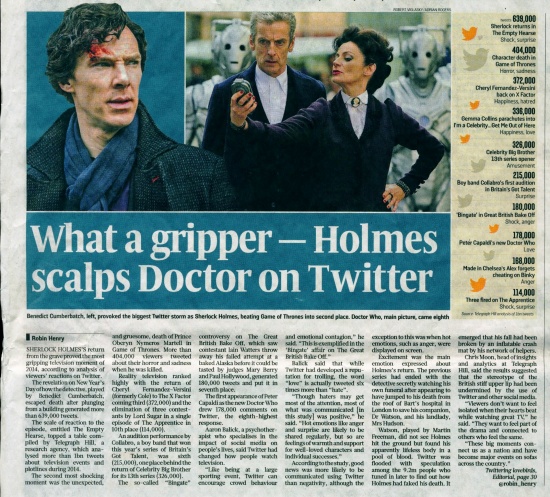 SHERLOCK HOLMES'S return from the grave proved the most gripping television moment of 2014, according to analysis of viewers' reactions on Twitter.

The revelation on New Year's Day of how the detective, played by Benedict Cumberbatch, escaped death after plunging from a building generated more than 639,000 tweets.

The scale of reaction to the episode, entitled The Empty Hearse, topped a table compiled by Telegraph Hill, a research agency, which analysed more than 1bn tweets about television events and plotlines during 2014.

The second most shocking moment was the unexpected, and gruesome, death of Prince Oberyn Nymeros Martell in Game of Thrones. More than 404,000 viewers tweeted about their horror and sadness when he was killed.

Reality television ranked highly with the return of Cheryl Fernandez-Versini (formerly Cole) to The X Factor coming third (372,000) and the elimination of three contestants by Lord Sugar in a single episode of The Apprentice in 10th place (114,000).

An audition performance by Collabro, a boy band that won this year's series of Britain's Got Talent, was sixth (215,000), one place behind the return of Celebrity Big Brother for its 13th series (326,000).

The so-called "Bingate" controversy on The Great British Bake Off, which saw contestant lain Watters throw away his failed attempt at a baked Alaska before it could be tasted by judges Mary Berry and Paul Hollywood, generated 180,000 tweets and put it in seventh place.

The first appearance of Peter Capaldi as the new Doctor Who drew 178,000 comments on Twitter, the eighth-highest response.

Aaron Balick, a psychotherapist who specialises in the impact of social media on people's lives, said Twitter had changed how people watch television.

"Like being at a large sporting event, Twitter can encourage crowd behaviour and emotional contagion," he said. "This is exemplified in the 'Bingate' affair on The Great British Bake Off."

Balick said that while Twitter had developed a reputation for trolling, the word "love" is actually tweeted six times more than "hate".

"Though haters may get most of the attention, most of what was communicated [in this study] was positive," he said. "Hot emotions like anger and surprise are likely to be shared regularly, but so are feelings of warmth and support for well-loved characters and individual successes."

According to the study, good news was more likely to be communicated using Twitter than negativity, although the exception to this was when hot emotions, such as anger, were displayed on screen.

Excitement was the main emotion expressed about Holmes's return. The previous series had ended with the detective secretly watching his own funeral after appearing to have jumped to his death from the roof of Bart's hospital in London to save his companion, Dr Watson, and his landlady, Mrs Hudson.

Watson, played by Martin Freeman, did not see Holmes hit the ground but found his apparently lifeless body in a pool of blood. Twitter was flooded with speculation among the 9.2m people who tuned in later to find out how Holmes had faked his death. It emerged that his fall had been broken by an inflatable crash mat by his network of helpers.

Chris Moon, head of insights and analytics at Telegraph Hill, said the results suggested that the stereotype of the British stiff upper lip had been undermined by the use of Twitter and other social media.

"Viewers don't want to feel isolated when their hearts beat while watching great TV," he said. "They want to feel part of the drama and connected to others who feel the same.

"These big moments connect us as a nation and have become major events on sofas across the country."